A lego braiding machine, powered by a single motor, which makes ropes and wristband. 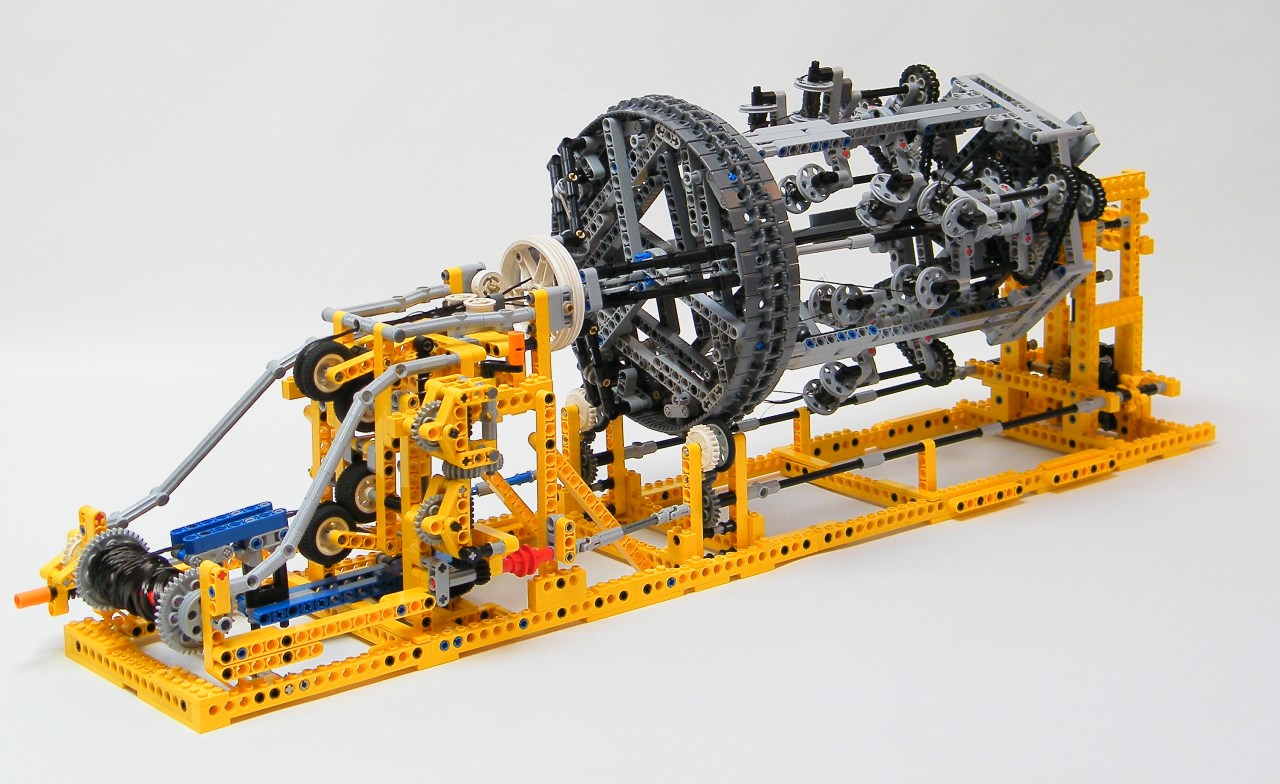 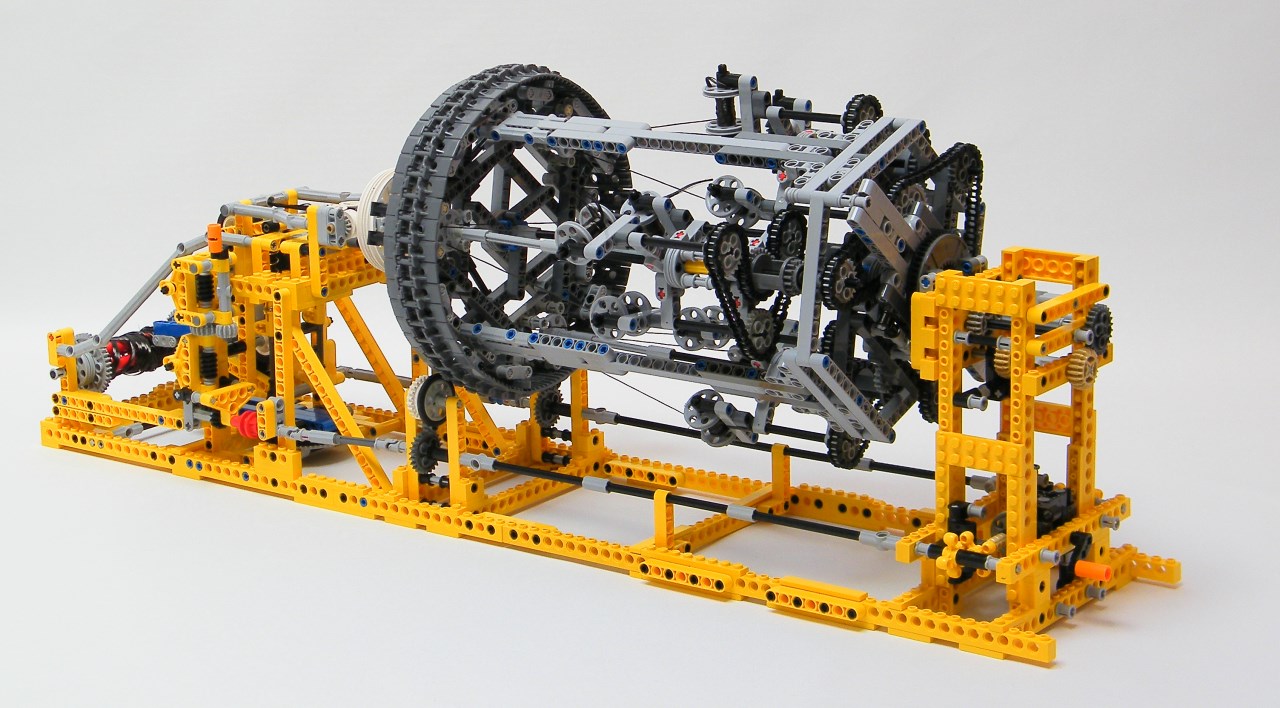 How does it works ?

Basically, the braiding machine is composed of : 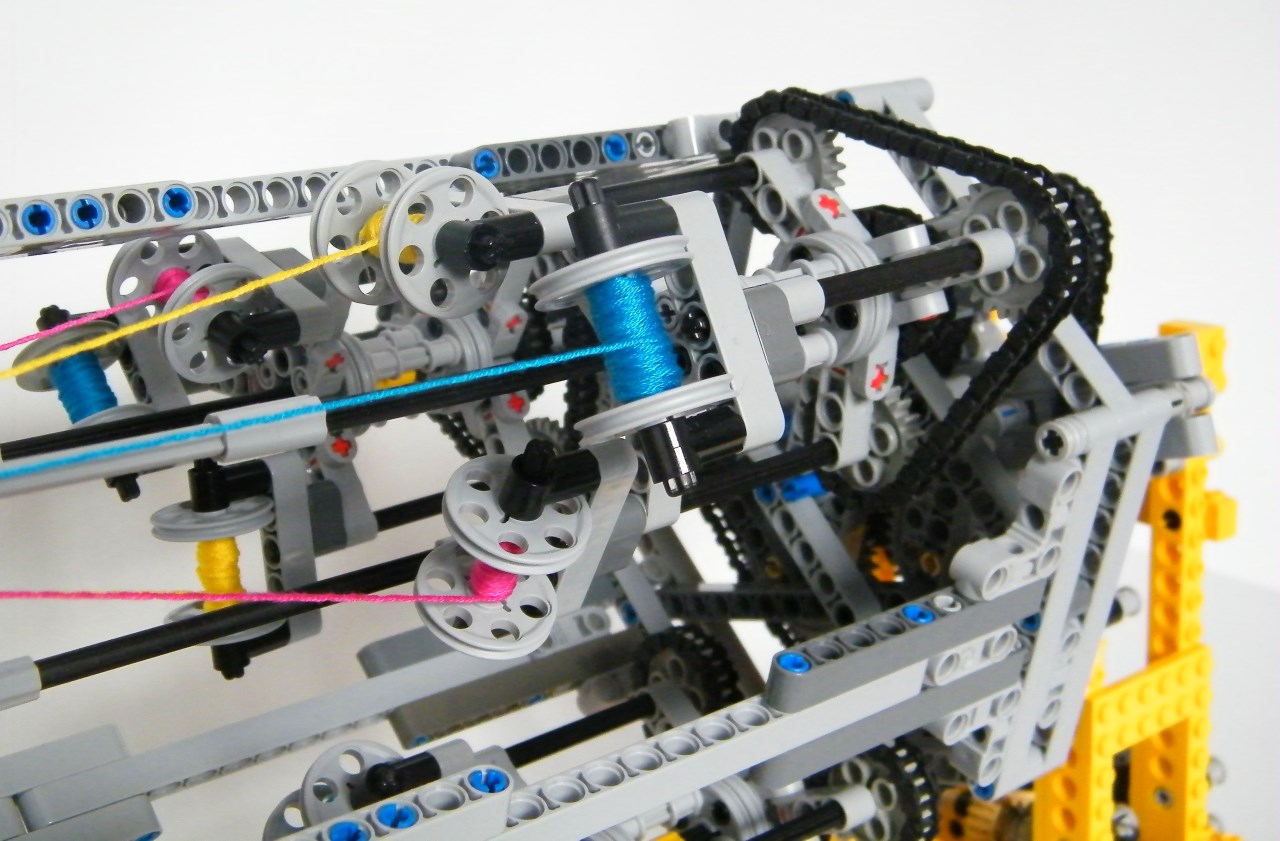 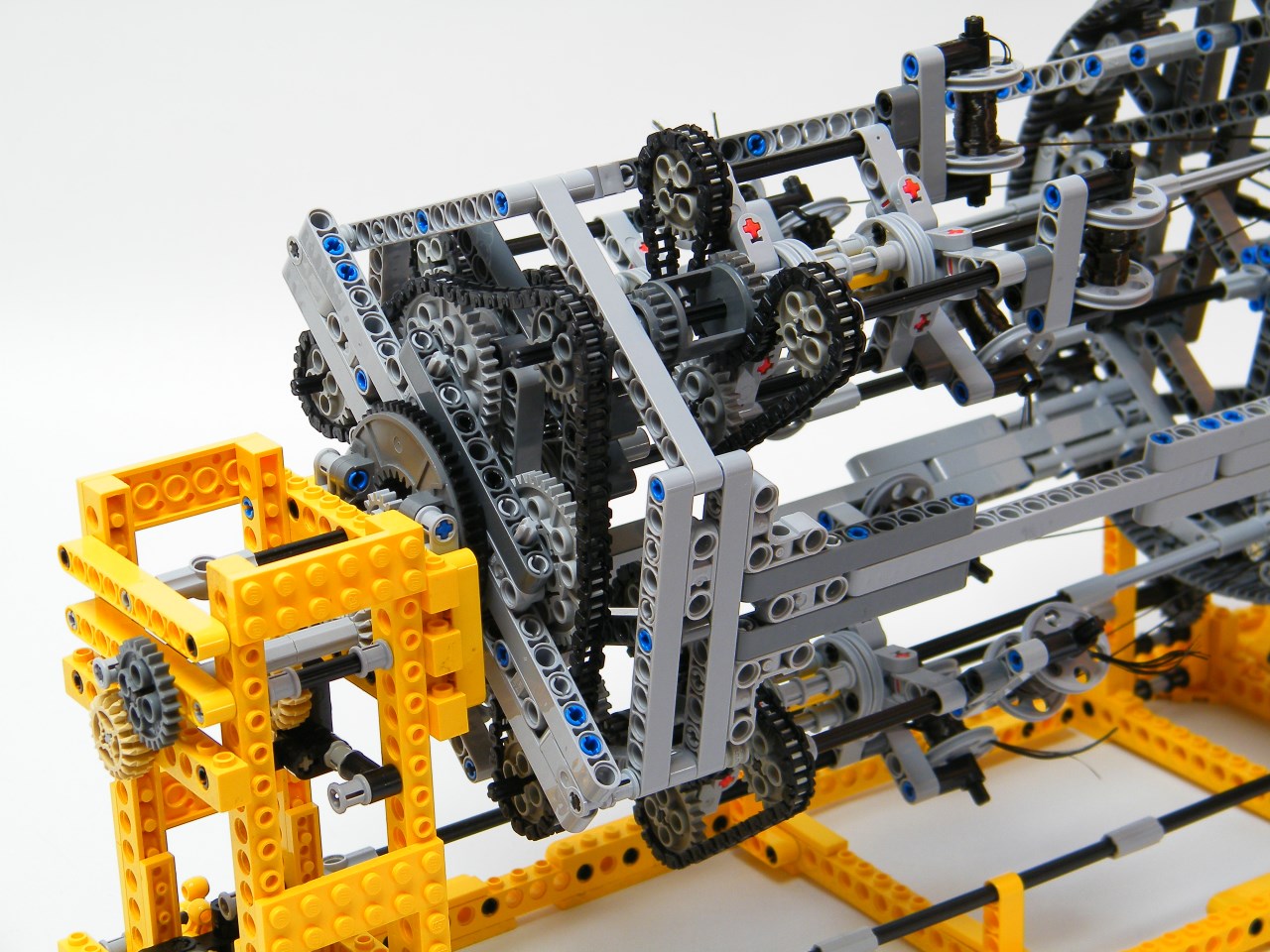 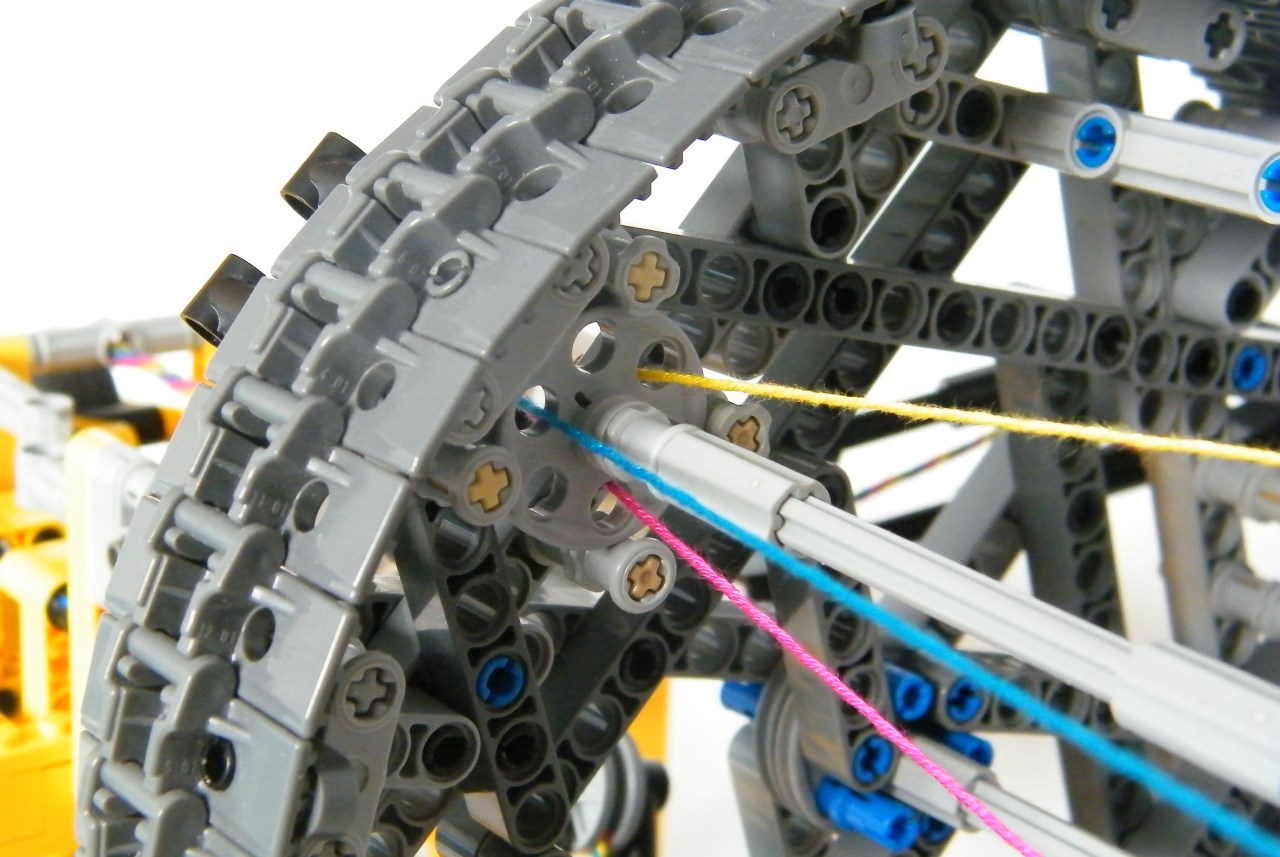 The 3 reels of one planetary then pass through a pulley with 6 holes and then in the die which is fixed in the drum. As the die is fixed and the planetary is mobile, the three string are forced to match together in one weaved string. The fact that each reel can turn on itself in counterclockwise of the planetary ensure that the whole weaving string doesn’t taken apart when they meet together. This is the important thing to understand how the weaving is working. 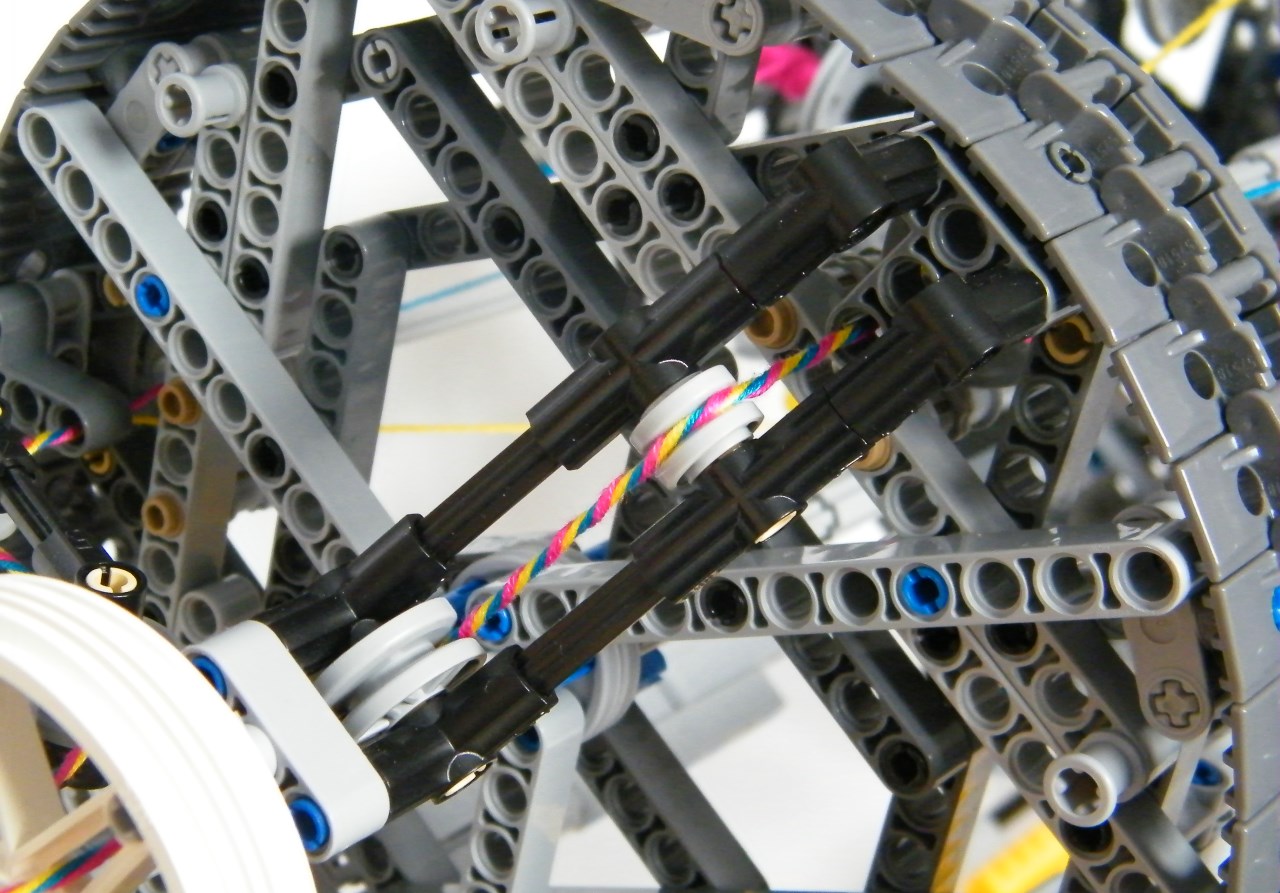 After this, 3 weaved string are in the weaving machine, then, they are interweaved to create the final wristband fabric. This is the role of the principal die (with the big white wheel). It works on the same principle as the precedent die. The wheel rotates with the 3 strings in, and the die (here is a liftarm T-shape gray) is fixed on the frame, the combination of the movement forces the 3 strings to meet together. And as the same principle seen above, each 3 weaved string rotates on itself (because the string is linked to the rotation of the planetary), which ensure the final fabric to not takes apart. 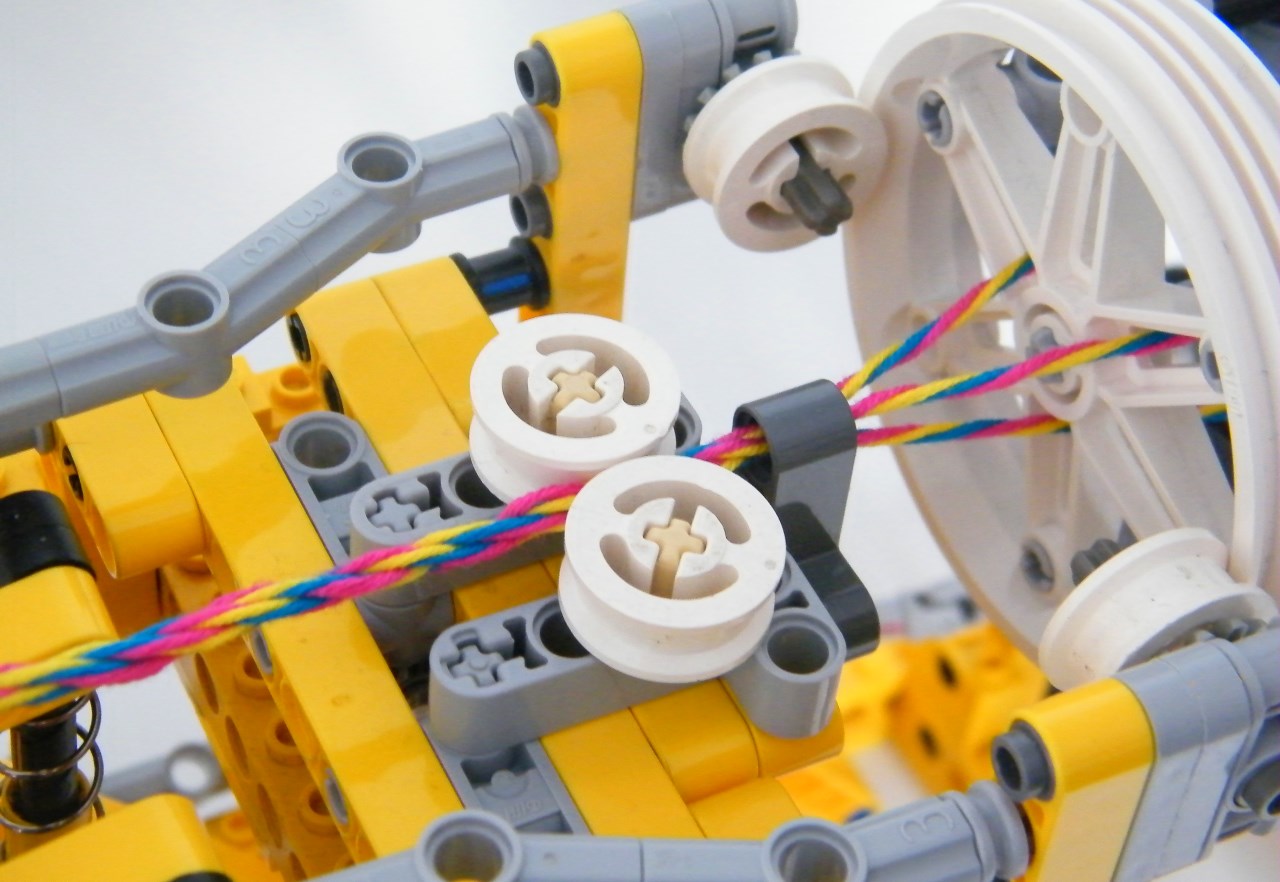 At this stage, the weaving fabric is made, then there is the pulling system which ensures the roll-out of the wristband. It is composed of 4 wheels which are tighten up by a spring. The final fabric passes through the 4 wheels, and as the 4 wheels is powered, it pulls the fabric. This part was certainly the most difficult part to create because of the many problems concerning the tension of the string and the rigidity of lego system. This final solution seems to be simple but there were many other tests before finding this. 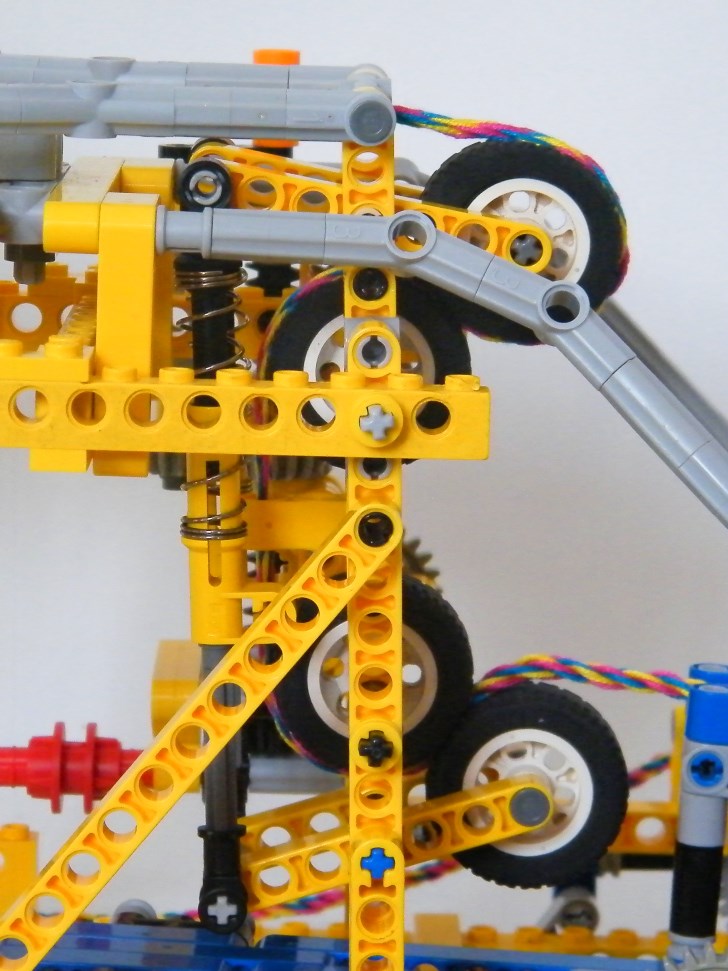 And to finish, the final fabric are stored on a drum with a automatic alternate winding system (in blue on the picture). This system is composed of a drum and a device in blue which can be moved from the left to the righ and lead the fabric to wind correctly on the drum. 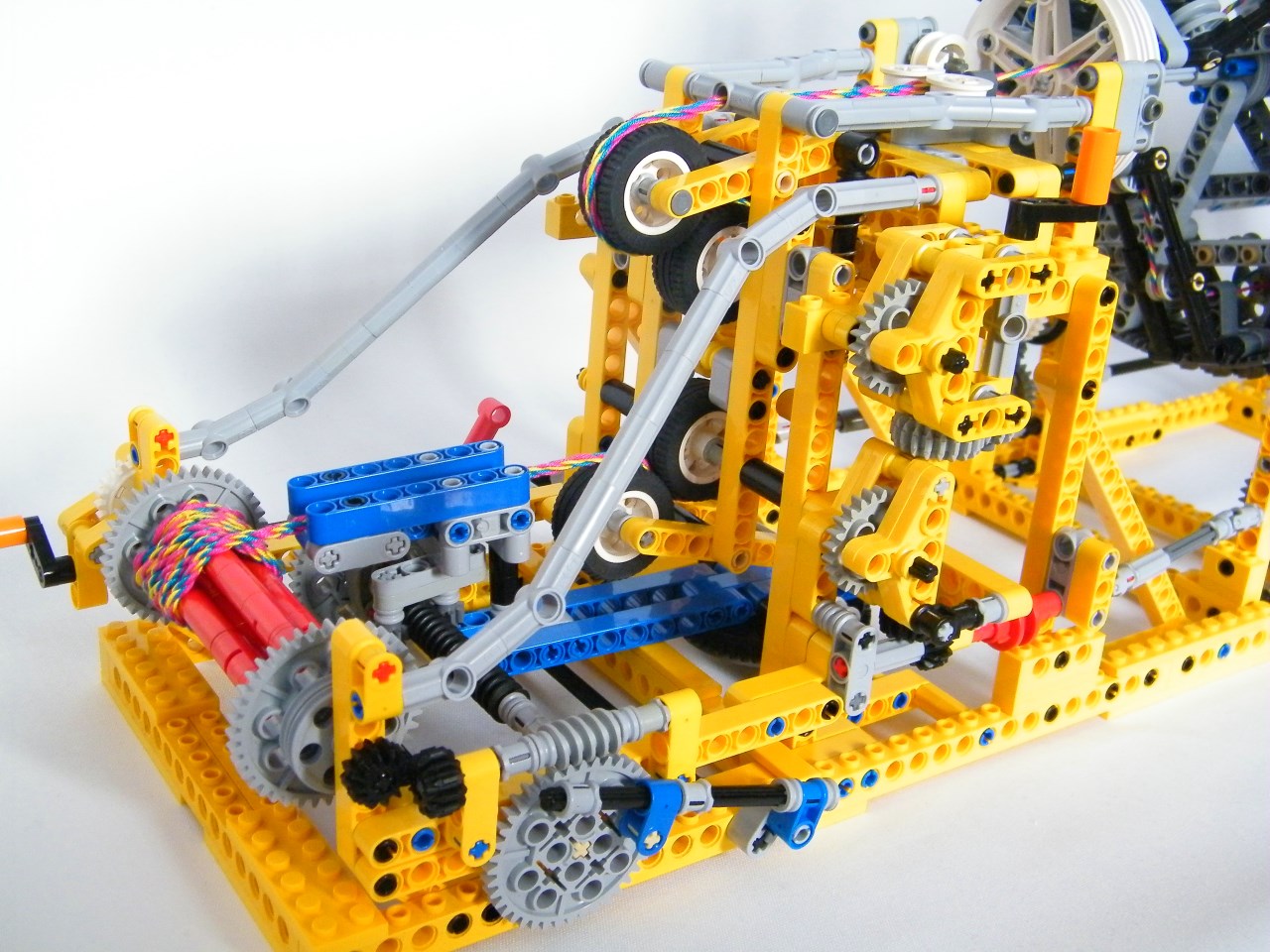 The functioning of alternate winding system is very simple. The blue device is linked to the drum with a linear motion gearing. When the device has reached the top point of left or right, there is a switch composed of a lever with a connecting rod which switches the rotation of the device, and then it goes on the other side. The inversion of the rotation if composed of a translation axle which drives a bevel gear with a gear or an other, the layout of the two bevel gears makes that the rotation inversion possible. The functioning is shown on the video and certainly more understandable. 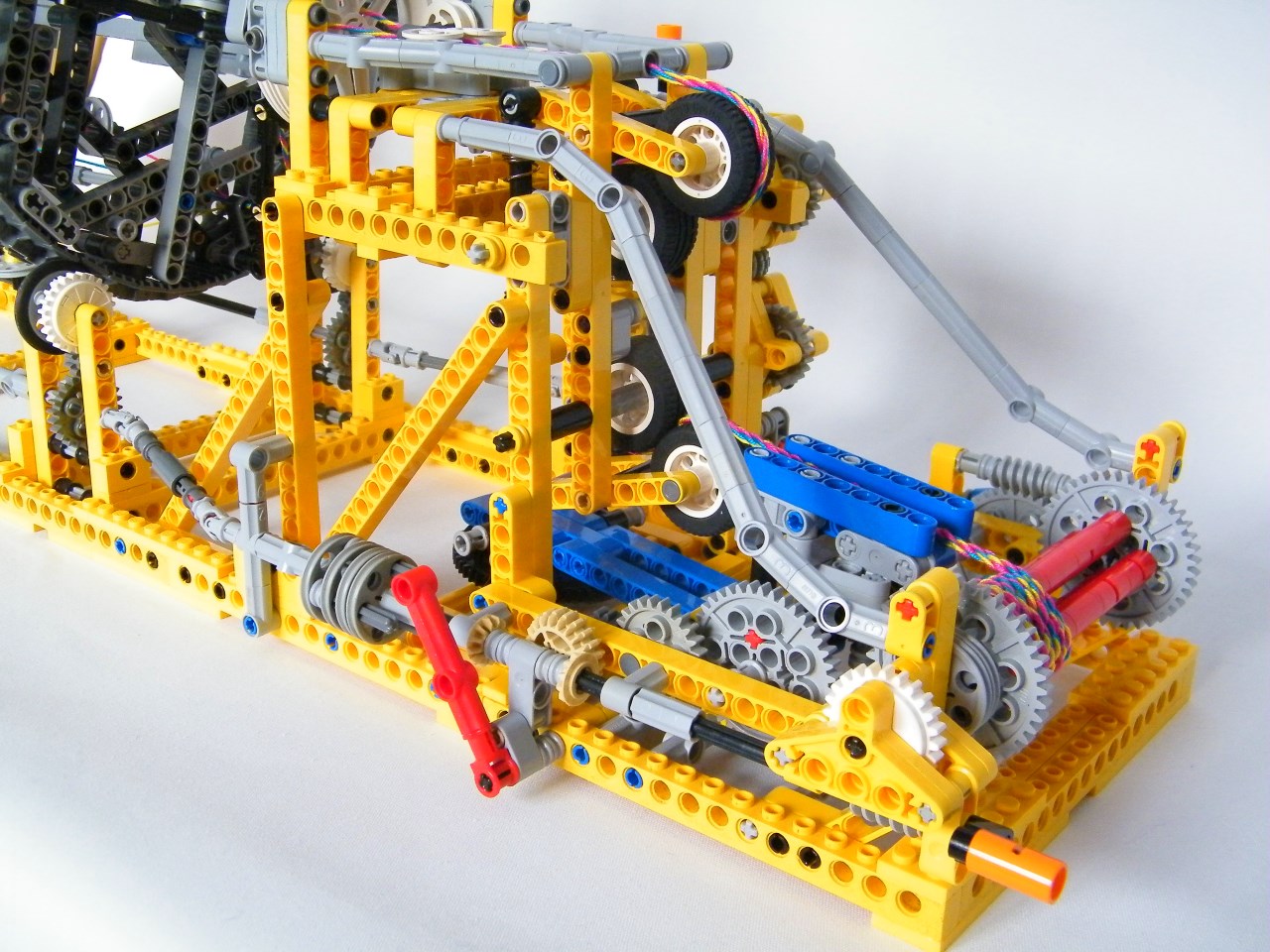 To talk about performance :

The video shows the functioning of the weaving machine and also the quality of the final fabric :

Blakbird has made some rendering of the mechanics :

You can see easily the whole compenent of the mechanical systems.

To conclude, this braiding machine were a big project for a long time ago for me. I have made many try and re-try and finally succeeded in making on different loom for the previous which can also weave fabric. The construction is also rather simple and very demonstrative for people who like mechanics, or kinetic art. I have made the design and color-scheme big points of the development of this project.

You can see on the picture the results of weaving process, first with colored braids, then an hybrid braiding with metalized braids, and at the end a carbon braid weaved at the JEC 2014.

On the 29th of January 2014, the Company Siltex who manufactures lot of braiding composite material for automotive, space and aeronautic, has contacted me for display my braiding machine on their stand at the JEC  Exhibition. The biggest European exhibition for composite industries, the JEC is also the largest composites industry organization in Europe and in the world with a network of 250000 professionals. The JEC has taken place the 11, 12 and 13th of march.

After the JEC, at the end of March, the loom has been returned to me, and I discovered that the loom has succeeded to braid composite material based on carbon, Aramid and Innegra !  You can see some picture of the raw material and some sample of what Siltex make. 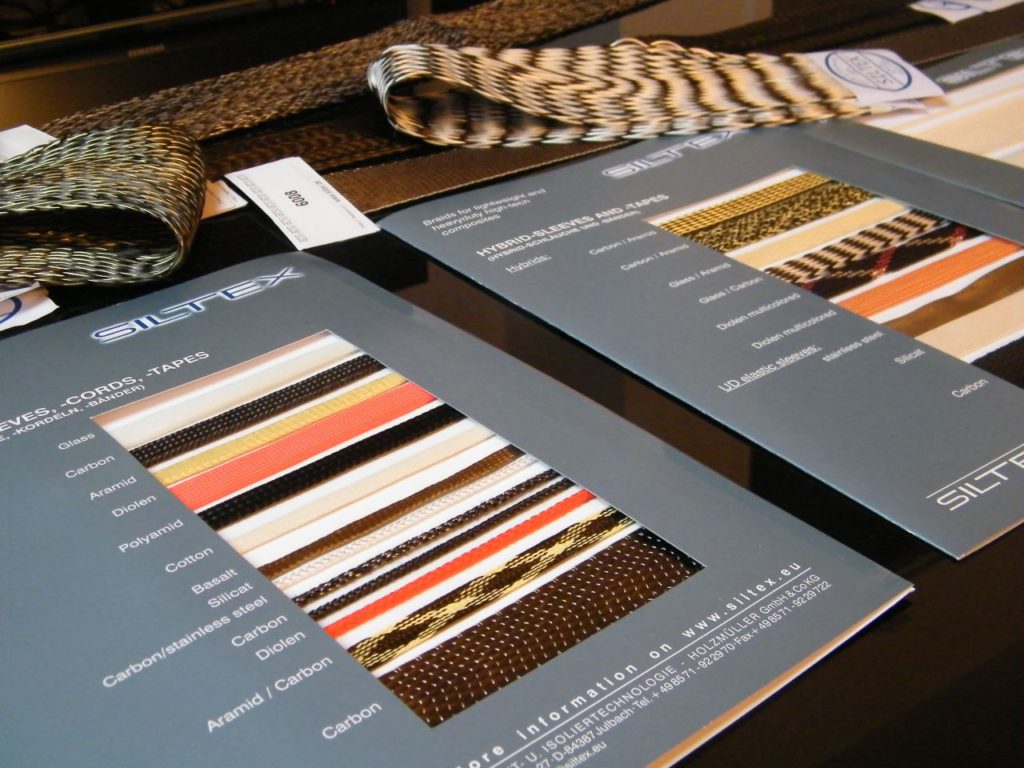 I will received soon a video and some shot of the loom during the JEC. Concerning me, I am very happy to see my creations on a international industries exhibition and of course, grateful for Mr Obermeier to have contacted me 🙂

EDIT from May 14′ : Siltex has written an article about my loom that you can read here : http://www.siltex.de/so-funktioniert-flechten/2014/05/ And also a video of functionning from M Obermeier : https://www.youtube.com/watch?v=goned0hpYSI

Want to buy this creation ? The Lego Braiding Machine has been indexed to mochub and are for sale at $459.95 with battery box and motor. The whole package included the parts, and the Pro rendering PDF building instructions. 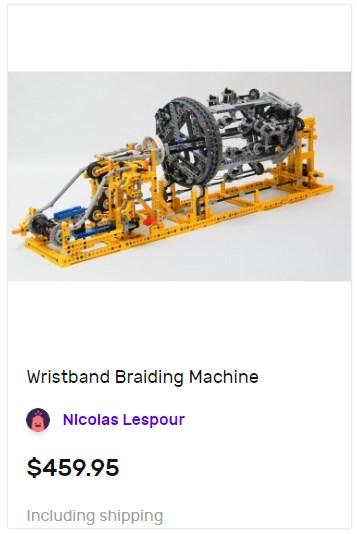 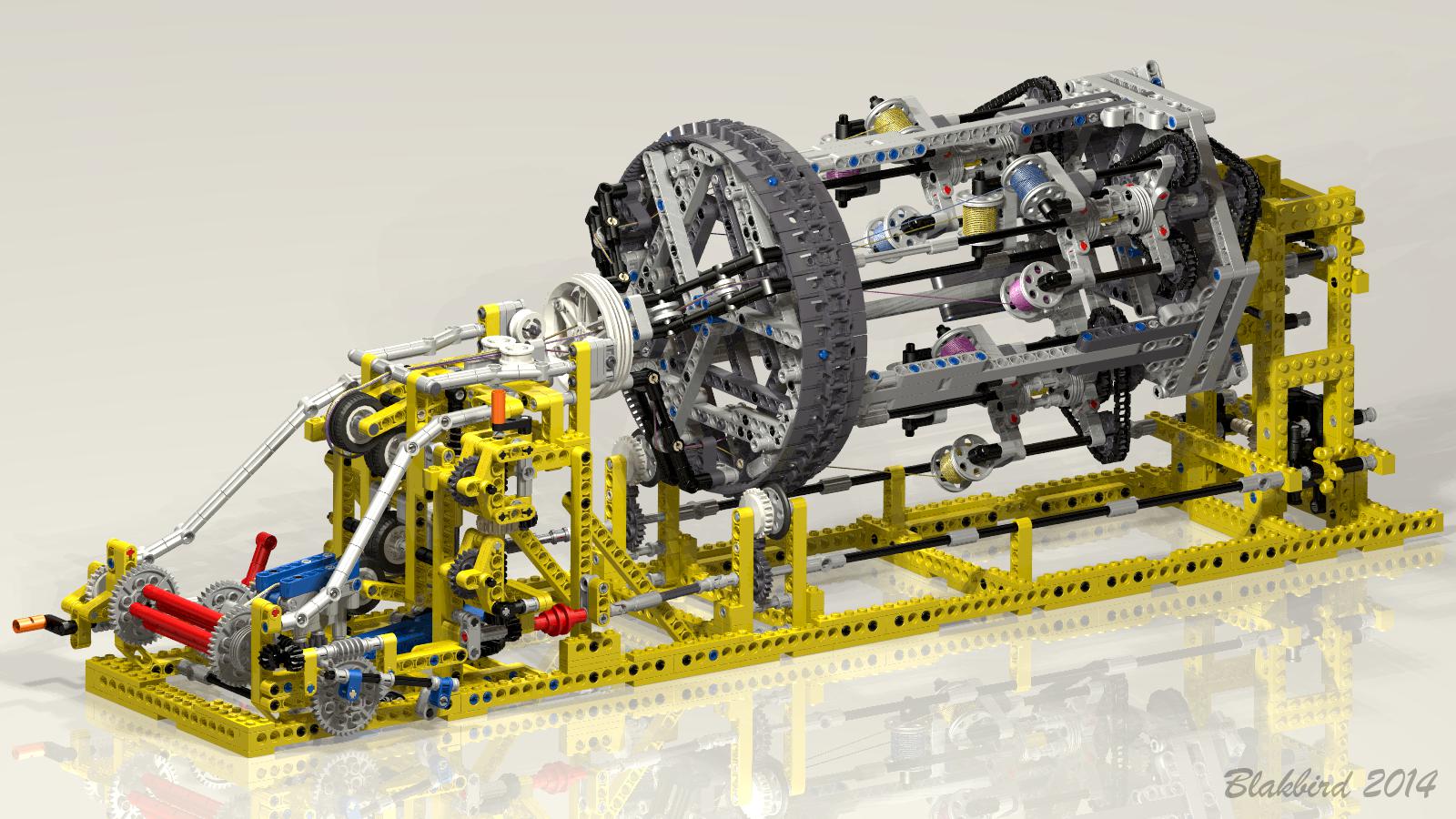 I have made the building instructions as a photo sequence but after, an afol (Alex aka afol1969) has made the pro building instructions ! Therefore I can propose you two version, one for free based on photo and one for sale at 10€ in PDF with fantastic work of alex.  The bill of material is available below. You do not need the Train Regulator 9V because you can put every current source (lego battery box, lipo battery box, train battery box) of just running by moving a crank.

You can also Watch it online on Rebrickable, the website which matchs your parts with the needed parts !

The two Zip-files for build and set up the braiding machine :

You can also watch them online :

How to set up the braiding machine :