A new small mechanical loom which weaves fabric using 6 reels, faster and more reliable than the previous one, including a many asked computing renderer building instructions ! 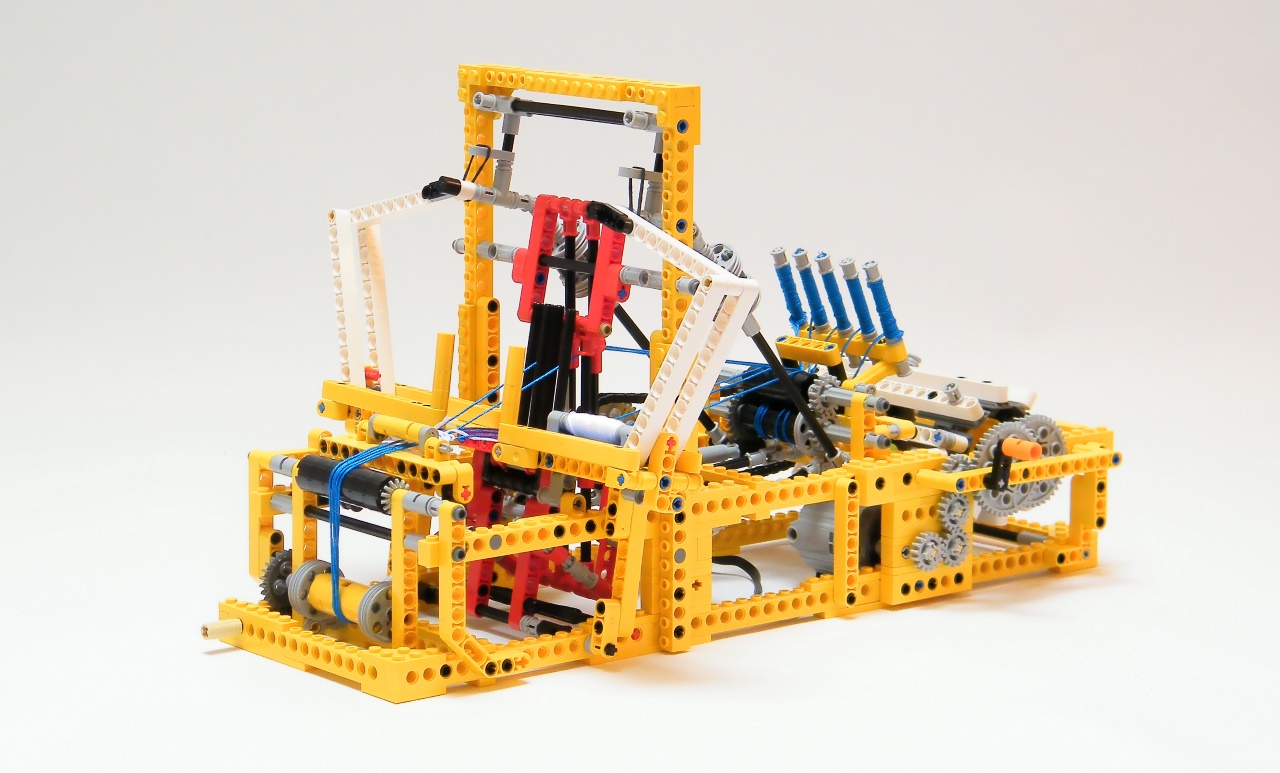 After succeeding in building my previous mechanical loom for the 2011 Fana’briques exhibition, I was proud to solve any problem I had with this construction but some points were not as I wanted. first of all the speed, even with a good motorization, at the high speed, the loom remains a little bit too slow. Then, the reliability, the loom was made with 2000 parts with a lot of lever, connecting rod, rotating mechanism and still deserve fine tunning to work well without monitoring. To overcome this, I built a limited torque system to prevent damage on component when problem occurred. Since 2011, I was looking for for a new loom, faster and more reliable. But there is impossible to think that with the same mechanisms had used in this loom that it can be possible to obtain what I want. That is why, I decided to build this new loom by keeping the good mechanism which works fine and design new one for improving reliability and speed. Today, I present you the final version of my new small mechanical loom. 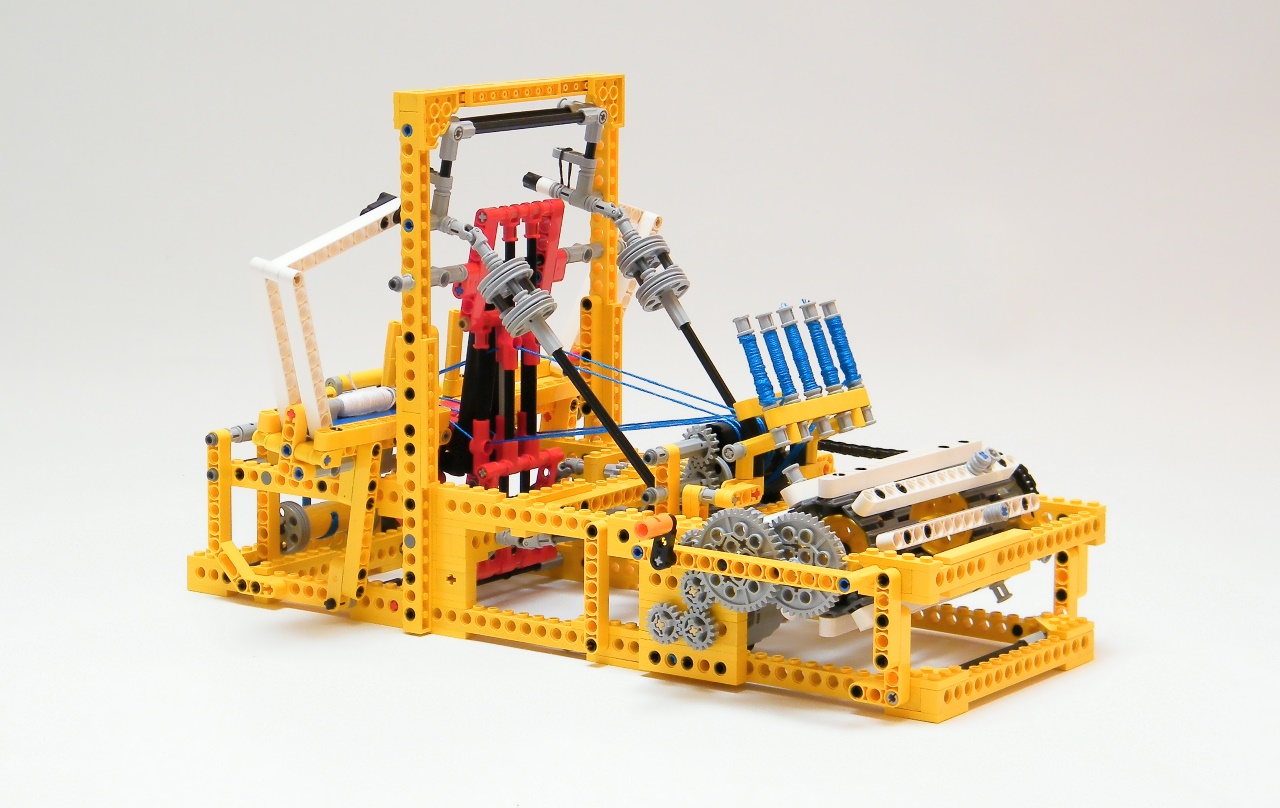 The basic functioning remains the same as I have already described in the article of my previous loom. I encourage you to read the article on Wikipedia : http://en.wikipedia.org/wiki/Loom it explains very well the functioning. Which iscomposed of: 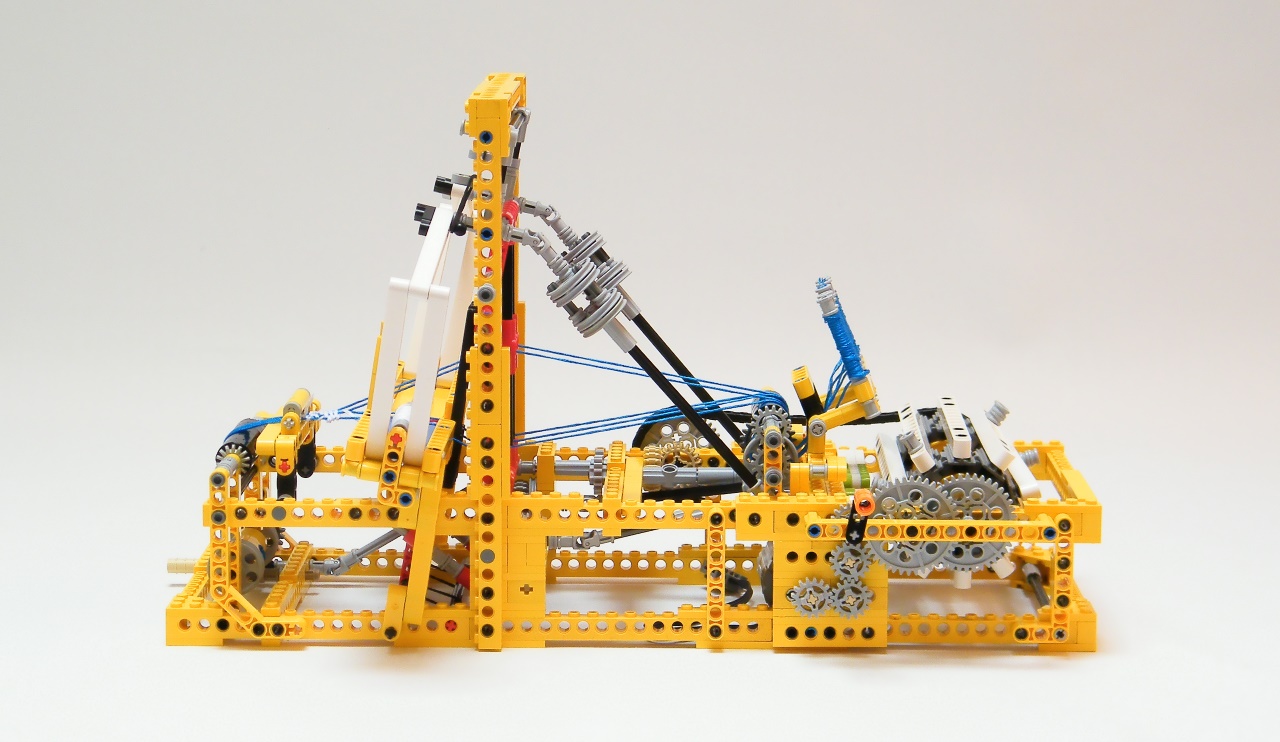 How does it work in Lego Version

Now I will present the different solution I have used to make the movement. The heddle frame is composed of two frame which supports 2 of 3 string, and are connected together with a beam. This beam rotate to cross alternatively the string from the up to down and so on. 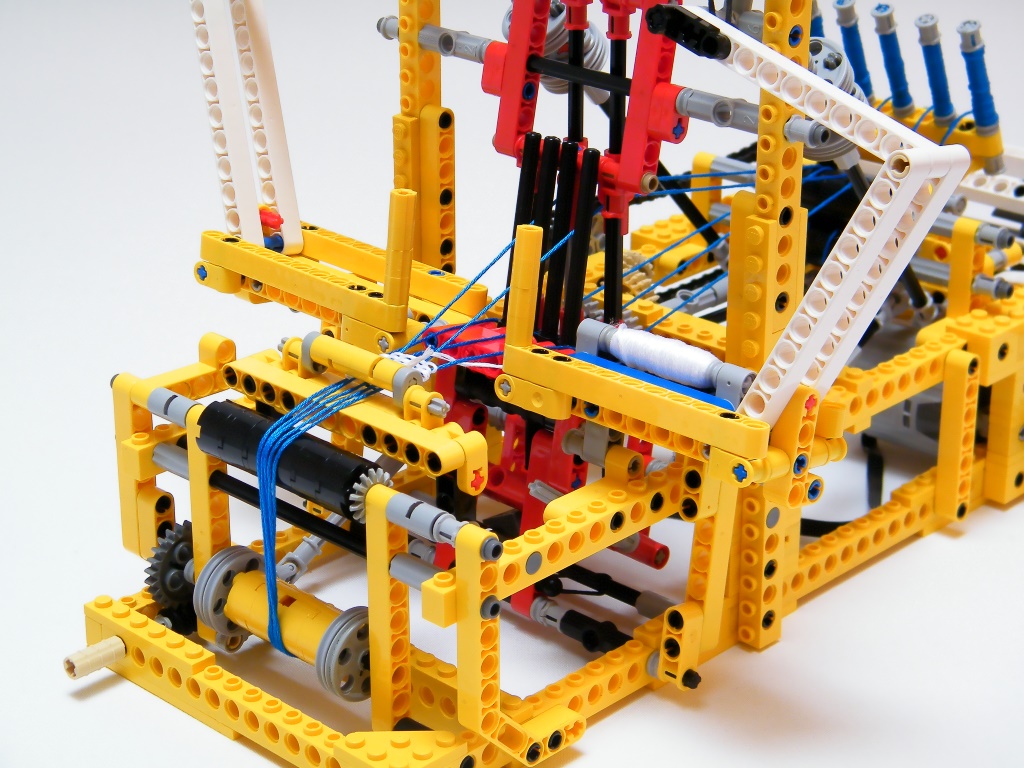 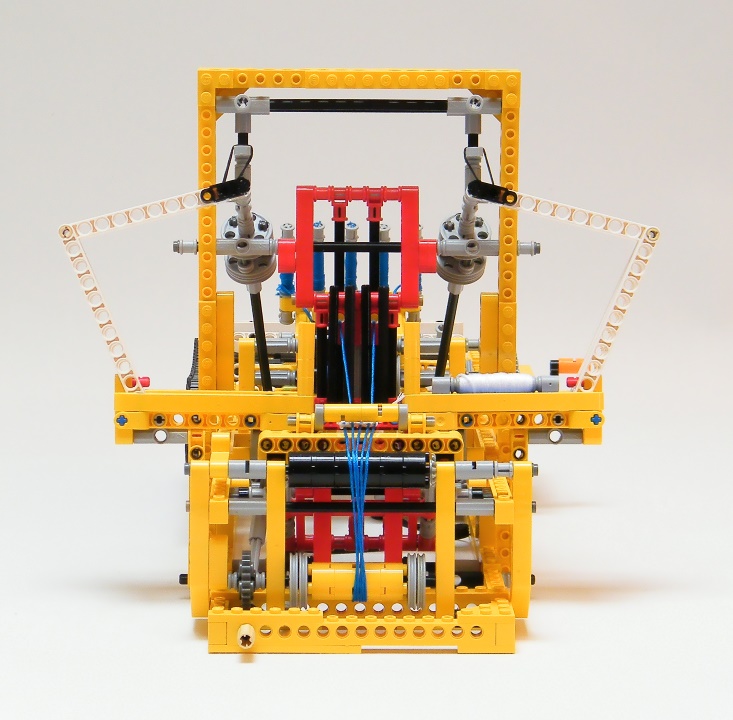 Now the important new features is the sequencing of the whole movement. On my previous loom, I use simply dephasing axle. First instance, on the first 90° of rotation of, the main axle, the heddle frame was operated with the reed (with a small phase shift for the reed), then, on second 90°, this is the right shuttle displacer, next the 90° was for the heddle frame and the last 90° was for the left shuttle displacer. The problem is that the movement was too continious and not enough impulsive. Combined with a classic lever and connecting rod, the system can not run very fast because I was limited by the continuous movement effect. That is why I decided to redesign completely the system which sequenced the loom.

The solution I have used is a timing drum. It is composed of 10 segment with white 15L beam with obstacle on certain place composed of bush. This bush, by rotating with the drum comes to push 4 lever placed on the frame of the loom. each lever is connected to a system. The white are connected to the left and right shuttle displacers, and the lime green on the heddle frame. Like that, each rotation of the drum, the 4 levers are operated alternatively. This mmechanismis like the small music box which play song depending of the asperities of the coded drum. Thanks to that, for instance, each the shuttle displacer is operated one time on 10 segments in a rotation fo the drum, ensuring a good impulsive functioning. 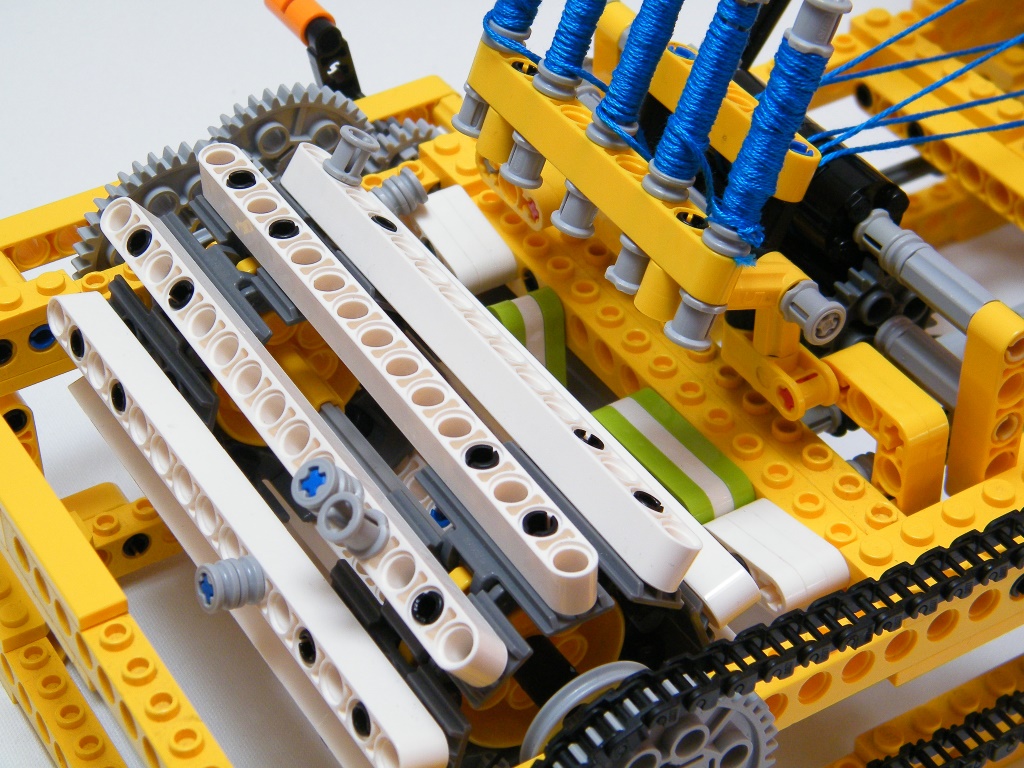 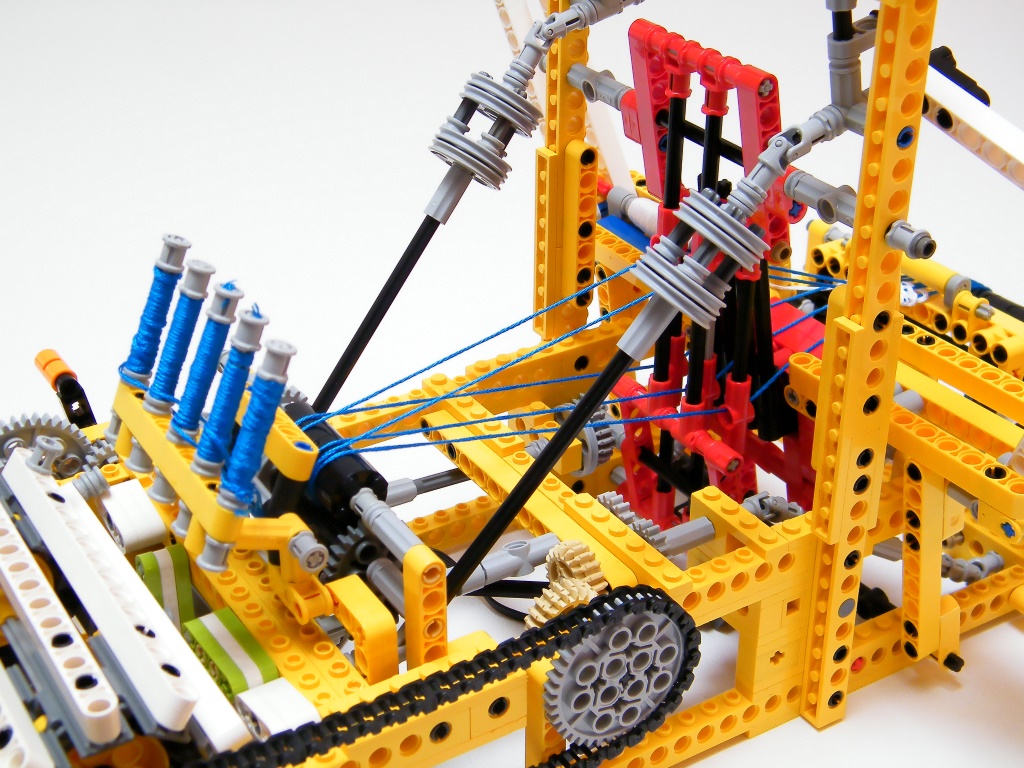 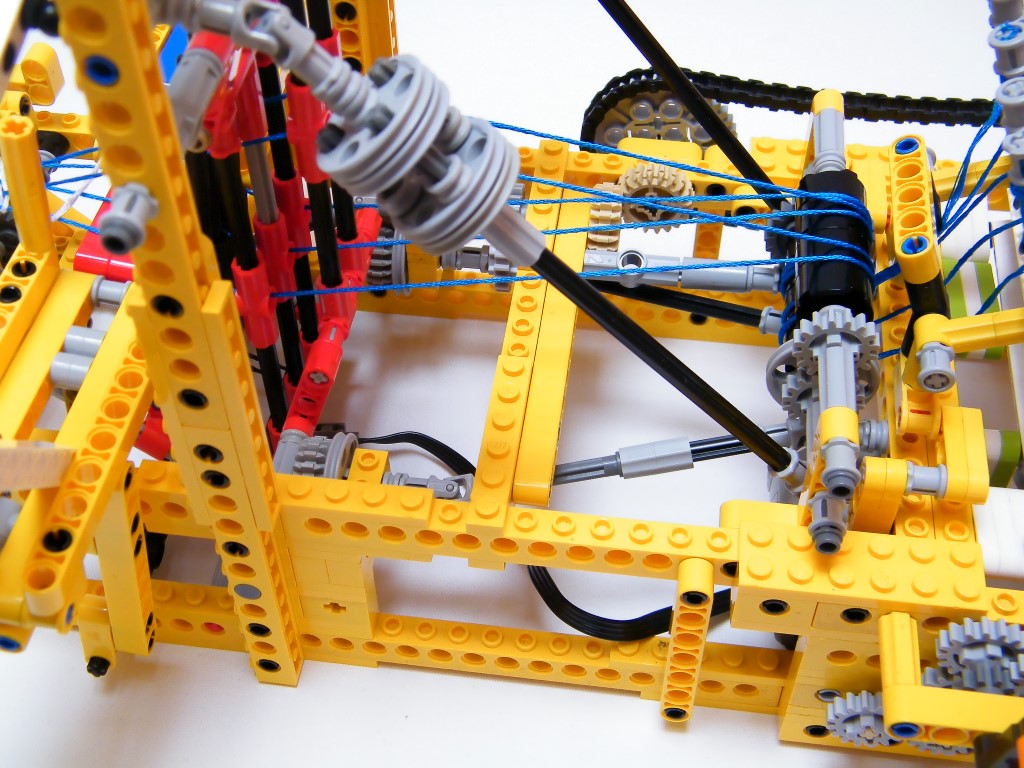 You will not also that on the timing drum, for each lever, there is not only on bush which push the lever, they are 2 or 3 to obtains the correct movement I want. For instance, for the shuttle displacer, the first bush which pushes the lever is placed as far as possible to obtain the maximum torque on the lever. When the lever begins to rotate, a other bush push the lever the nearest as possible in order to complete correctly the movement and set the lever to the vertical. Then, the lever is released and the shuttle displacer comes to the original position, using rubber band. This type of coding using a timing wheel enable me to delete all tuning regarding the rubber band, there is no need to set up correctly the strength of the rubber because the mechanism has many time to recover its position comparing to my previous loom. Then, the reed, as mentioned below is operated by the heddle frame rather than a dedicated system. This is why there are only 4 levers to operate the loom, as the reed is connected to the heddle frame. I connected it by using a simple connecting rod placed on the extremity of the rotating beam of the heddle frame, and on the middle of the reed in order to have the same movement whatever the movement of the heddle frame. Finally, two rubber band connected to the reed ensure the return in stable position, ensuring also the good locking in two position of the heddle frame. 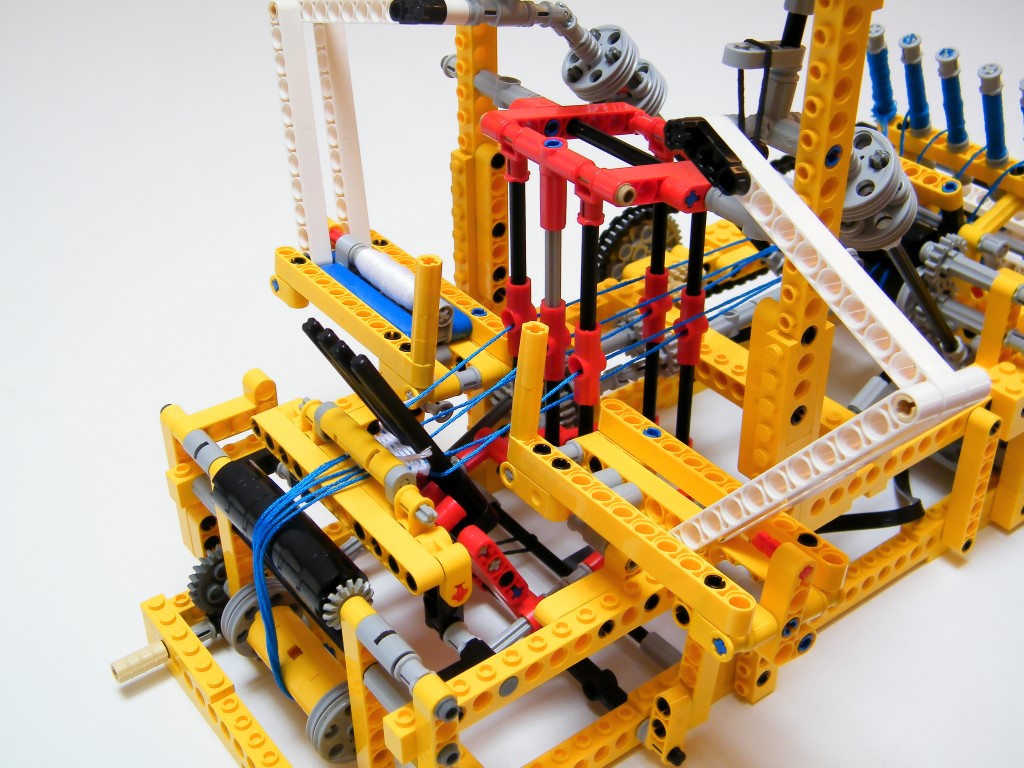 Finally, the last system is the lead of the 5 string used. On my previous loom, I use two rollers at the beginning and one big roller to the end to lead the string from the reel. This solution with two rollers at the beginning enable to control a good tension of the string, which is very important for weaving. That is why I have keep this system for the beginning. But for the end, I use a single roller but with the same diameter as the back. It enables me to have not gearing reduction between the rollers, which was very complicated to set on my previous loom. Consequently, the gearing is very simple than my previous loom. A chain set on a 40 tooth gear on the axle of the drum is connected to an other 40 tooth gear. After a 20 tooth double spur gear, the axle goes to the beginning rollers and to the end rollers using two universal joins and a worm and 24 tooth gear. Consequently the whole transmission pass though the frame and not as the exterior, which is better for looking. Regarding the gearing, I have chosen this reduction (1/24 finally), to have a fabric -according the the used strings- which is not too tightened which permits to see the weaving process with the two colors. It is of course possible to obtain more tightened final fabric by replacing the second 40 tooth gear (near the tan spur gear) by a 24 tooth gear. The gearing ratio will decrease and the fabric will be more tightened. 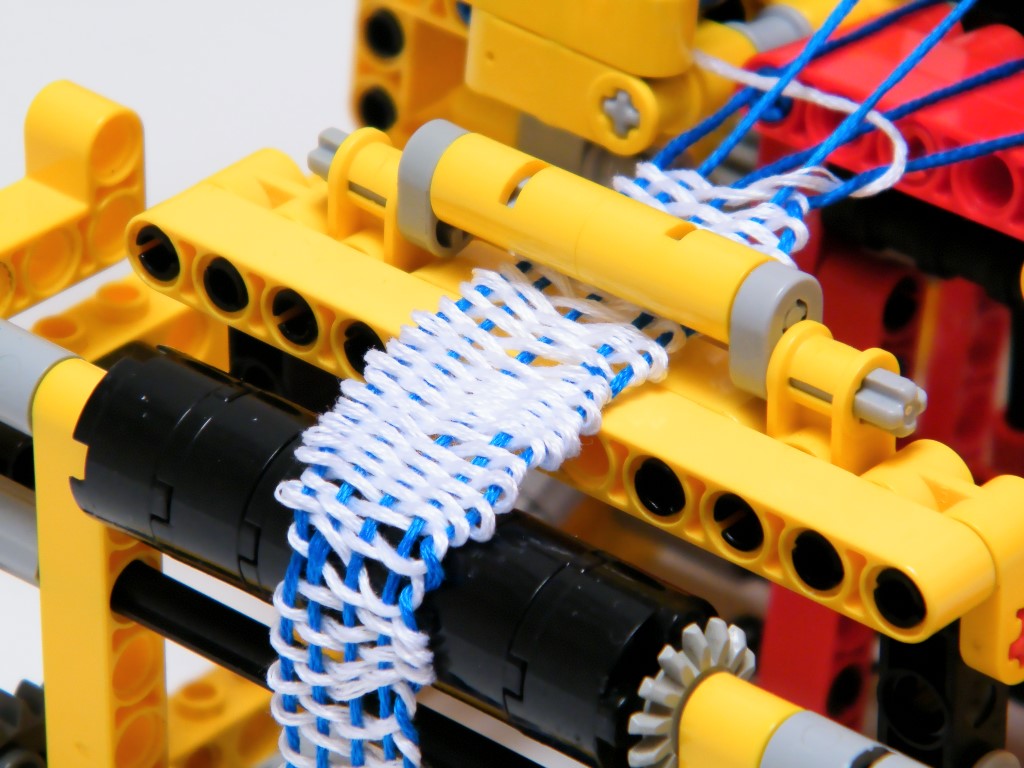 Here is the video which shows you the functioning and the abilities of the creations and after the pictures.

Get The building Instructions

Want to buy this creation ? The Small Loom Machine has been indexed to mochub and are for sale at $239.95 without battery box, and $249.95 with. The whole package included the parts (except rubber band and string), and the Pro rendering PDF building instructions. 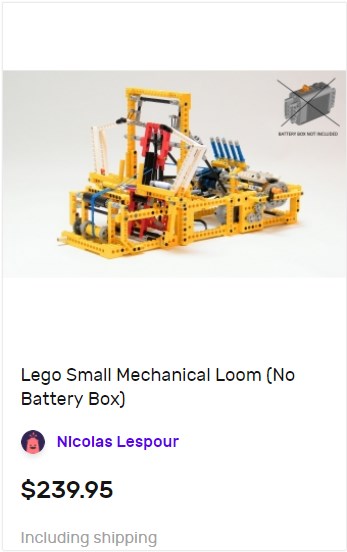 I wanted to build a new loom for a while but I have also discover after uplaoding my previous loom in Youtube in 2011 that you are thousand of want the instructions ! Nevertheless, I did not make the building instruction for my previous loom because it was composed of many parts, some rares, and was not enough reliable for me. But this loom was developed to be reliable, simple, fast and using standard parts, that is why I was motivated to create the building instructions for you ! 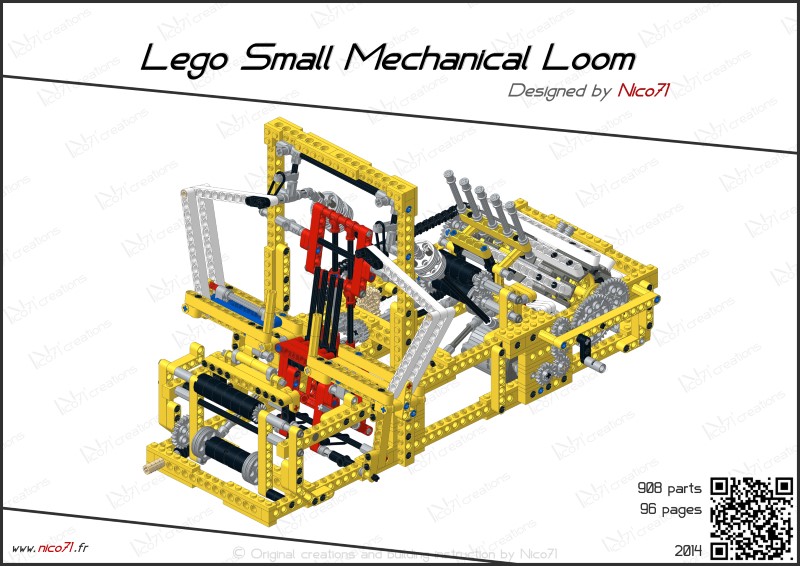 I have consequently spend many hours on MLcad to build the CAD model and Lpub to rendering the building instructions and after some pictures adjustment I was abbe to propose a beautiful PDF of my building instructions, in 96 pages / 170mo  and 908 parts ! This building instructions was made to make possible the print after with a white background and high DPI definition in standard A4 size, that is why it doesn’t look like the Lego Official Instruction graphically. The bill of material can be download for free, and it is also available on rebrickable online (for matching your parts with the needed parts).

Want to check before if you can build the Small Loom ? The Small Loom has been indexed to Rebrickable.com, the website which matchs your parts with mocs !

Please note that you can use any rubber band you want, as they are 2x2L lenght (arround Ø16-20mm) in rubber. You can also use any power functions motors you want, the looom has been tested with M, L and XL motor.

The building instructions PDF is not available for free, due to considerable amount of time spend and in the only aim to allow you to rebuild this creation. Consequently, the building instructions are on sale for a minimum amount of 10€ with free donation. It is possible for no-beginner builder to build my loom using the pictures, but buying the PDF instructions ensure you to have the correct tuning of the loom and to encourage my work 🙂

How to sep up the loom

Here is a video to show you how to set up the loom follow carefully and enjoy your loom !