A Lego Vertical Ball Clock, featured hours and minutes, powered by a motor and regulate by balls. 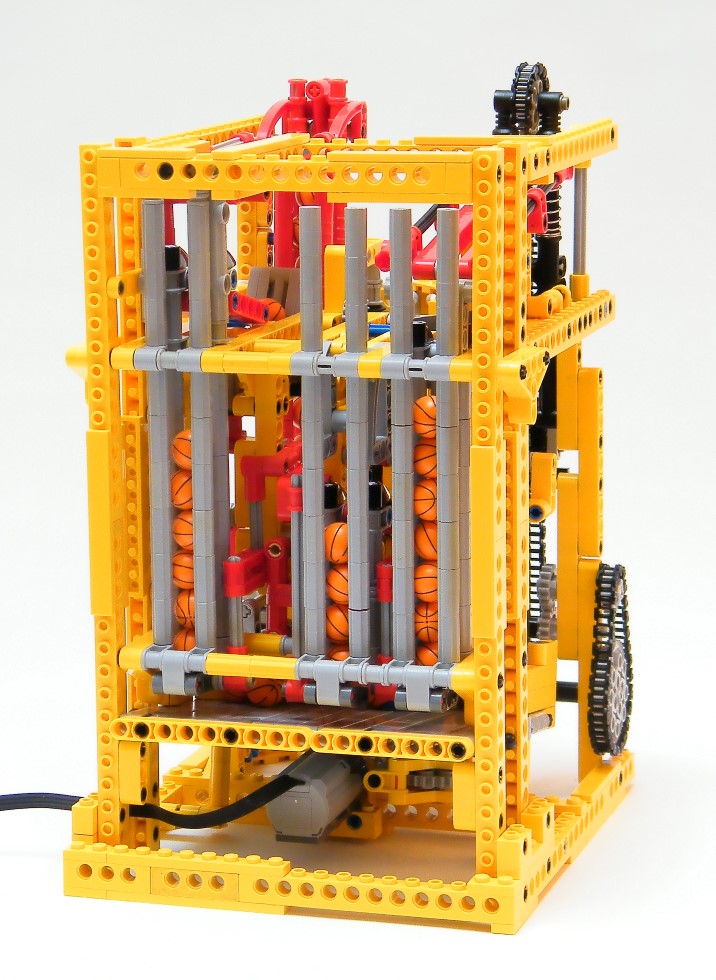 You know now, for a long time ago, that I like clock, testified by the clock I have made. But I also like Great Ball Contraption, this clock is the meeting of both. I wanted to create a new clock but with using small Lego balls to show the time and regulate it. The creations I propose to you today is a adaptation of the popular ball clock made in horizontal version : the original ball clock. 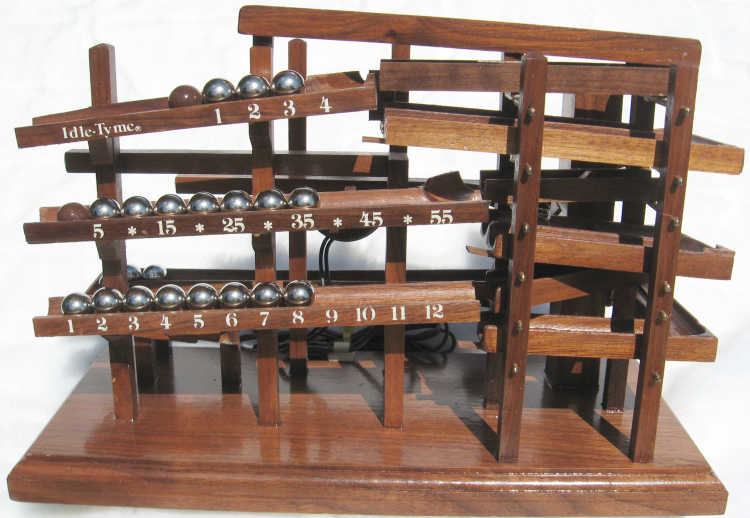 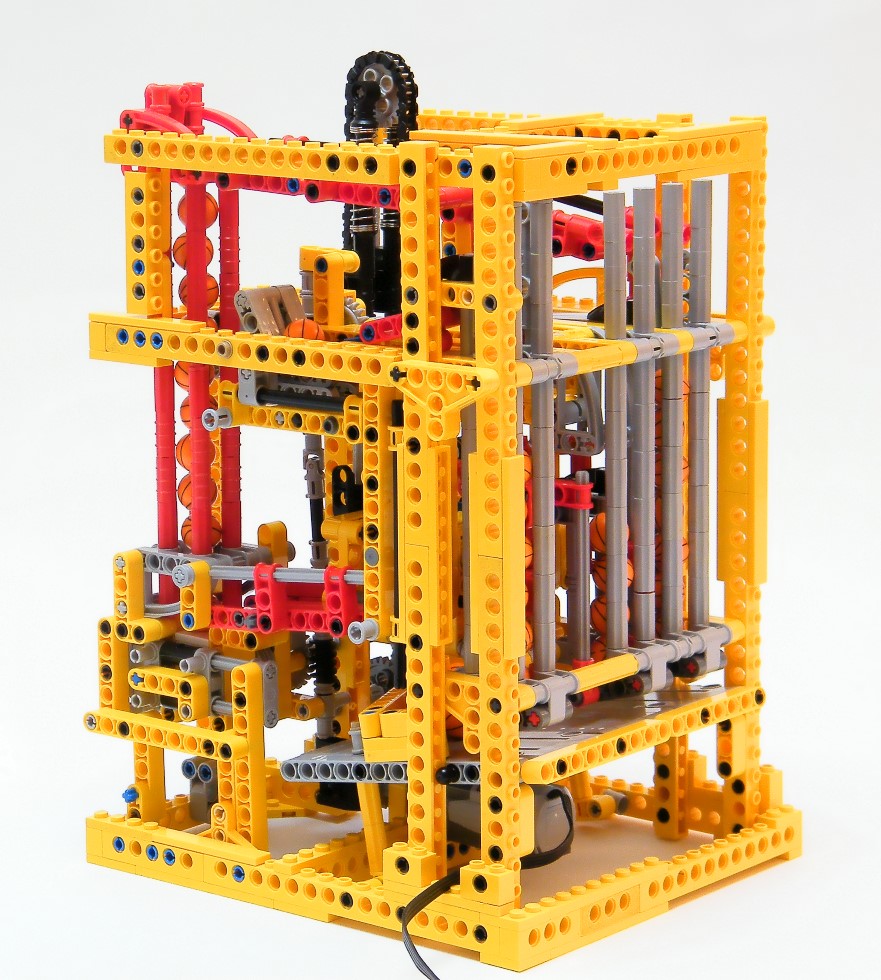 How to read the time

The starting of the functioning is the storage of the balls located at the bottom. It is composed of a enclosure inclined which makes roll the ball to the main lift. Additionally, it is equipped with an rotating agitator in order to not have stuck balls. 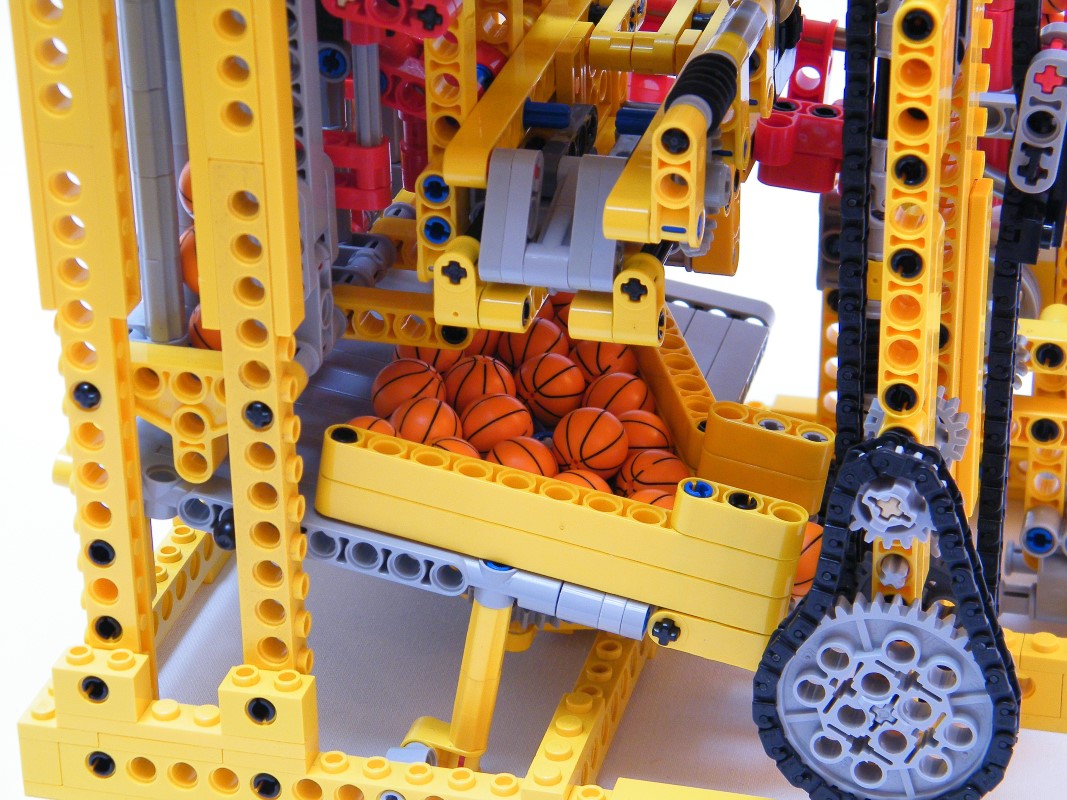 Then the ball are lift thanks to a chain with a fork. On the whole chain, there is one fork, which runs complete movement in 60 seconds. 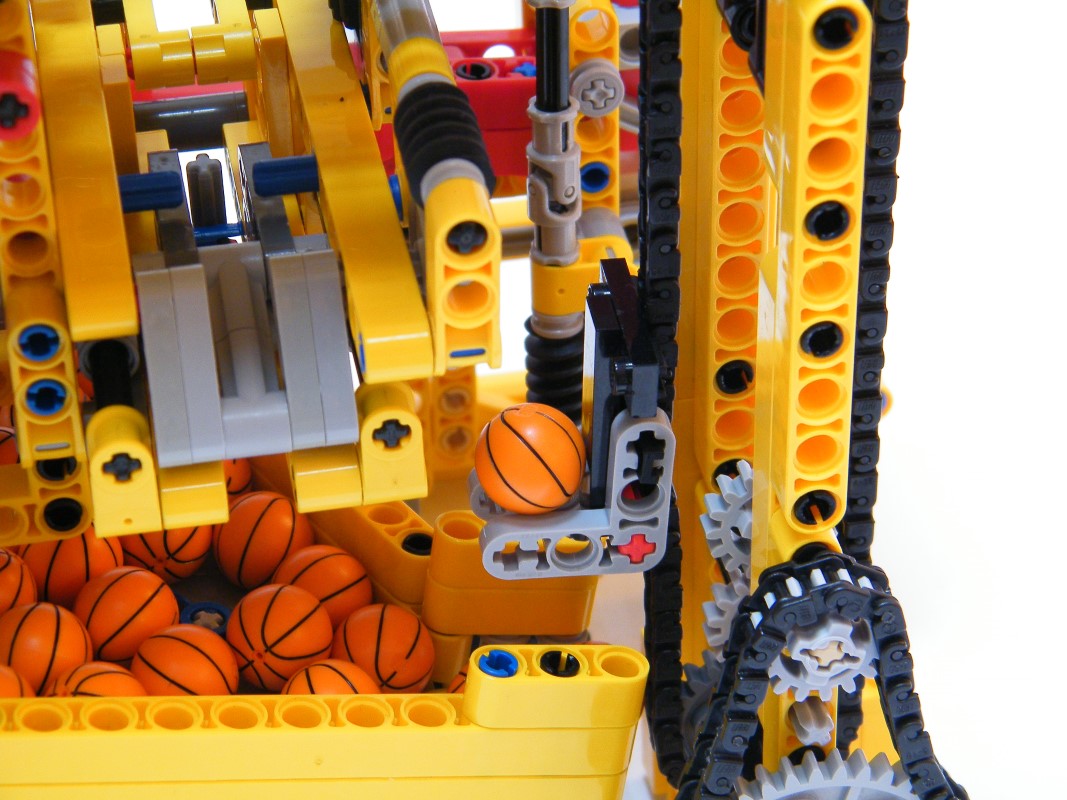 Then, arrived on the top, the ball are pulled by a Tile 1×4 connected to a chain on the top of the fork. when the tile comes to the 24 tooth-gear on the top, it rotates and pulls the ball outside the fork when it is already horizontal. 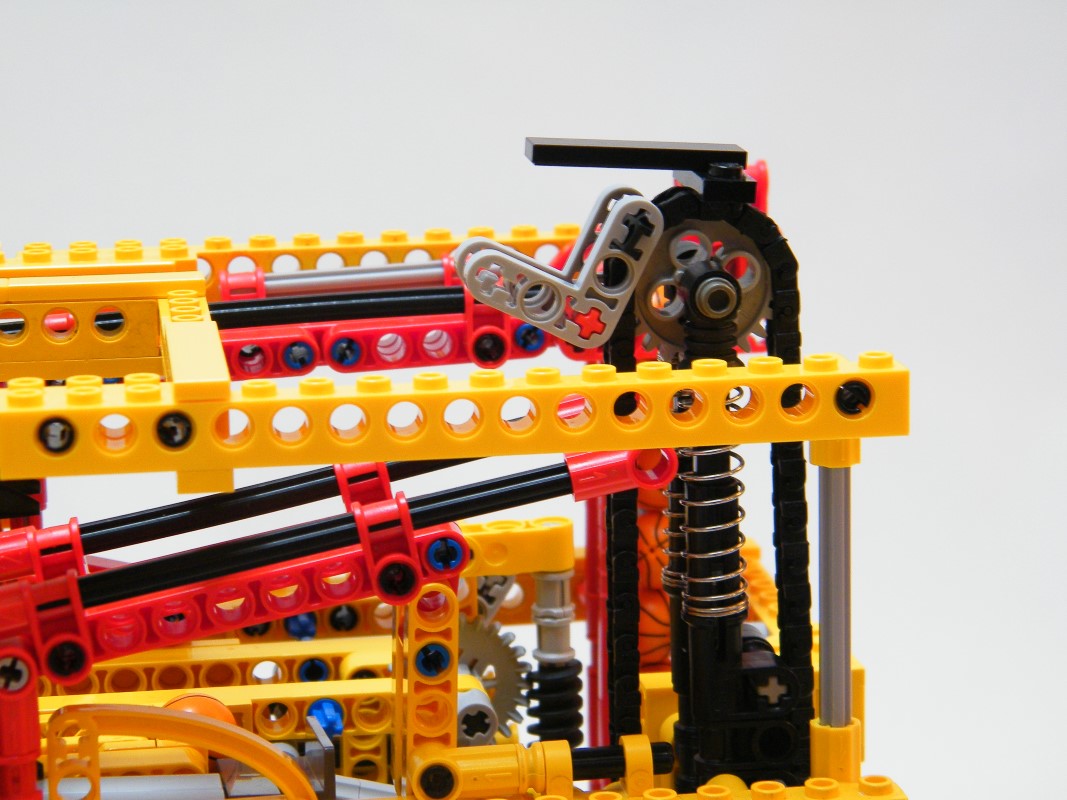 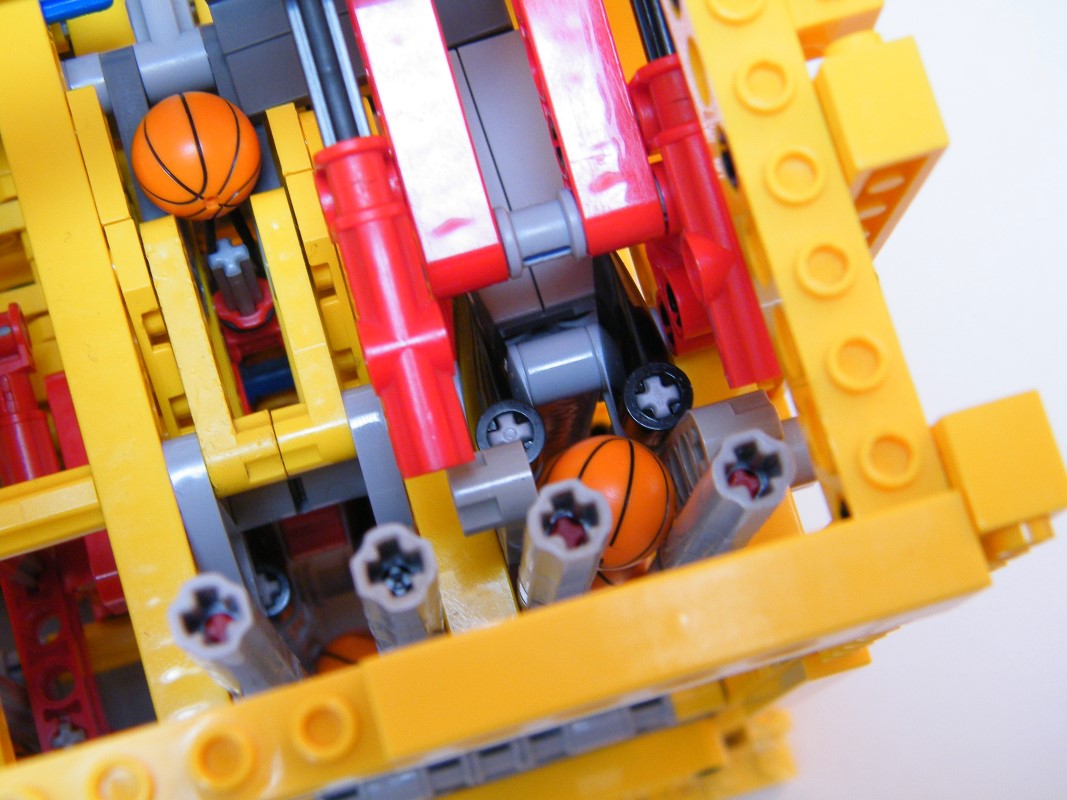 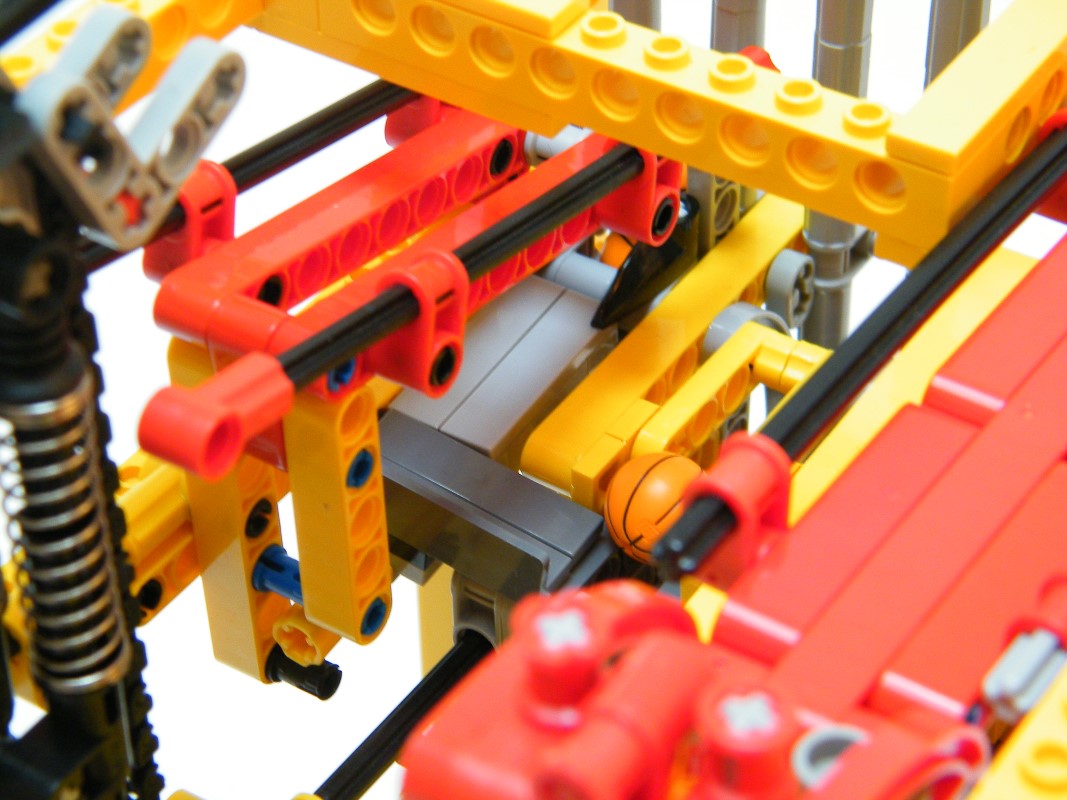 In deed, adding a ball of the ten minute each minute is not sufficient for having a correct counting. Because after 09, there is 10, so the 9 located in the minute unit must be removed to be 0. This is made by the set to zero unit. Which is composed of a main pusher (powered by a crank and connecting rod) and a lever with auto return thanks to a rubber band.

The lever is connected to the trapdoor located on the bottom of the minute digit. When the lever is operated, the trapdoor opens and releases the ball in the digit unit. The main principle of the set to zero is that without ball in it, nothing happens, but when there is a ball, the ball inserts itself between the pusher and the lever, as the pusher pushes the ball, the ball operated the lever and release the 9 balls, then the operated ball is filled in the ten minute digit. 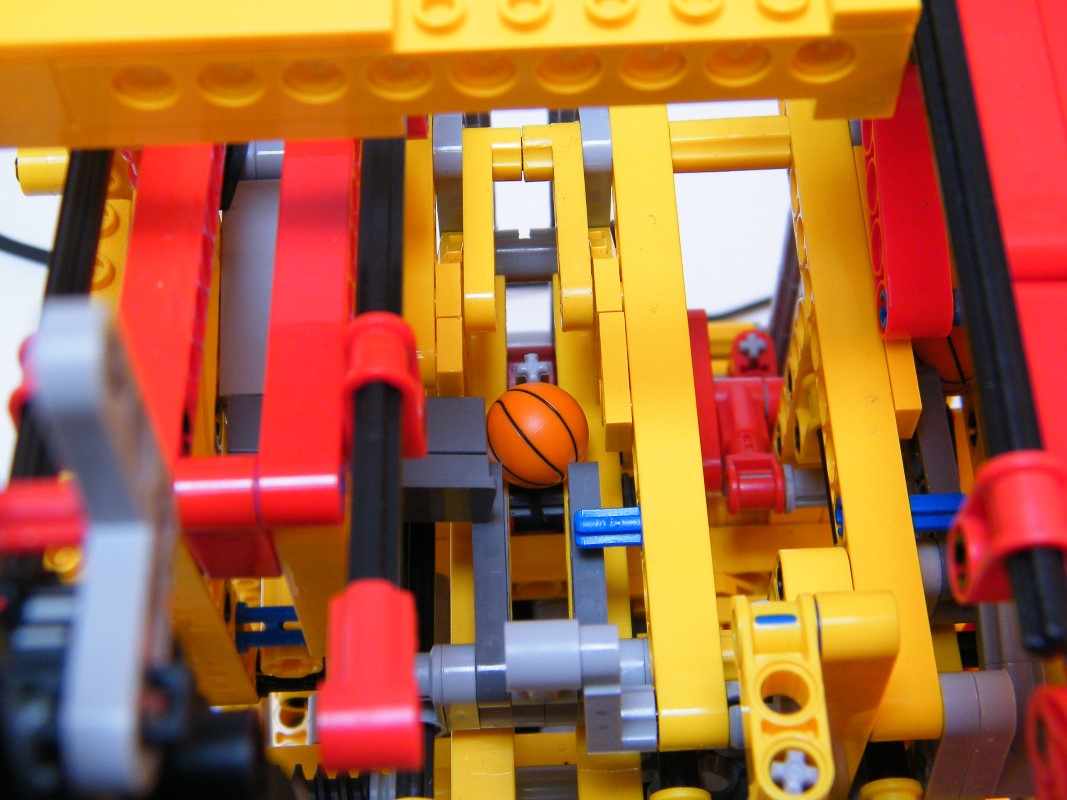 This system is very reliable because this is not the ball which operates directly the lever, for instance by its velocity of its weight. It is used only as an intermediary between the pusher and the lever, which enables the system to have strength and reliability, this is the aim of this system to split up the actuator (the pusher) and the trigger (the ball). Thanks to that, each time 9 balls are stored in the minute unit, the 10th goes to the ten minute unit and release the 9. 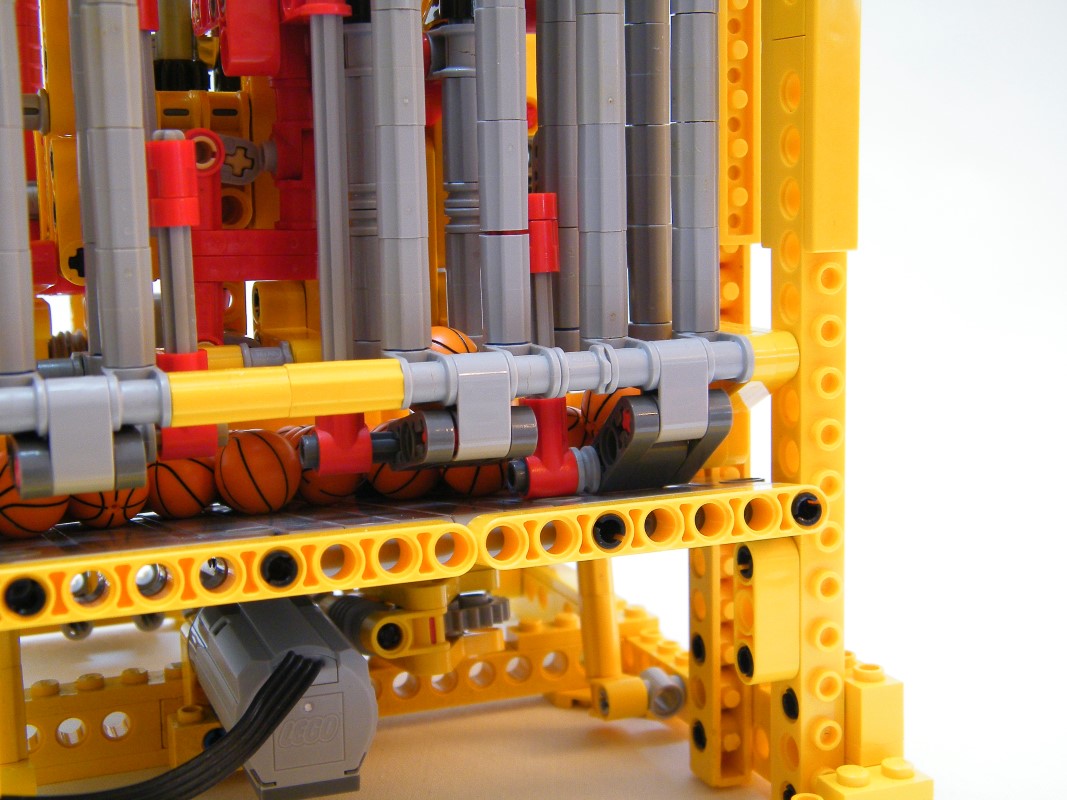 Now this is the same system used for the ten minute and the hours. The ten minute digit can handle only 5 balls, at the 6th, its is moved outside the digit and goes to the hours digit by passing in a set to zero system. this set to zero system is located on the middle on the creation, in transverse position due to the room available. 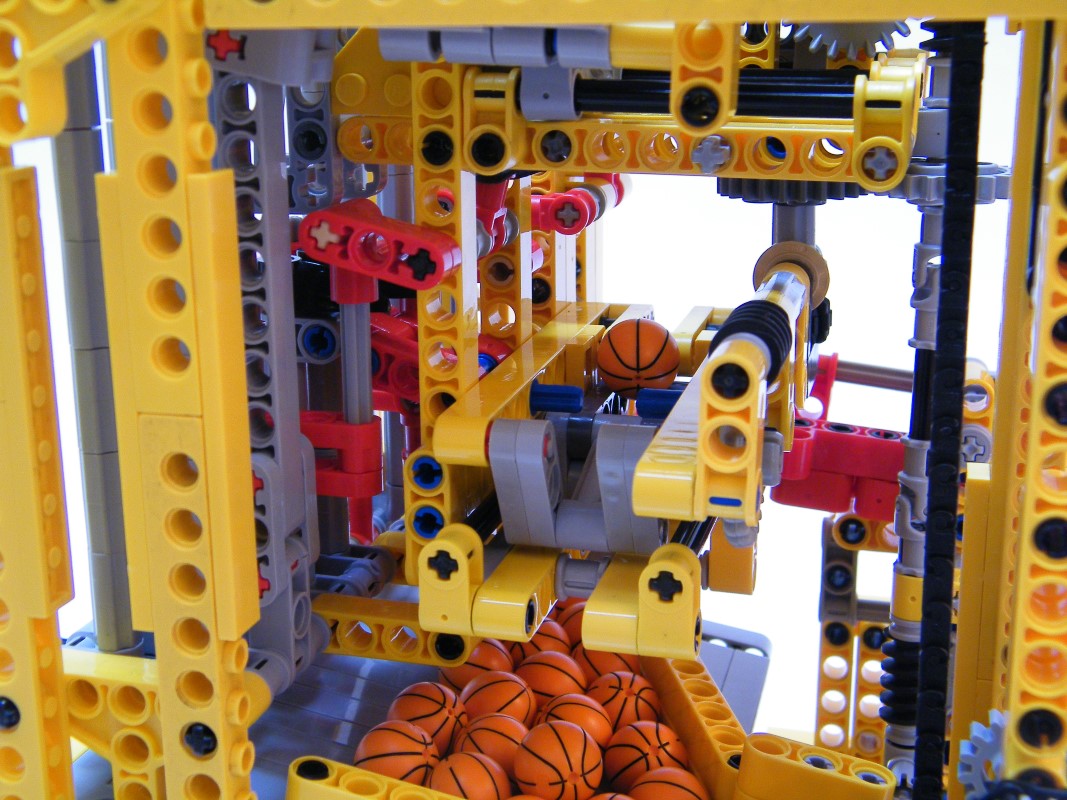 Its work on the same principles as seen previous, the ball, after passing in the set to zero system is move to the hours digit using a ball pump. Why a ball pump ? For two reasons, the first is that the ball needs to be lifted because the entry of the digit hours is located upper than the digit ten minute (because there are 11 balls instead of 5). And secondly, because I would like to obtain a instant movement of the ball. When it arrives in the ball pump, and go inside, an other ball moves on the top to go in the hours digit. If I have used for instance a system of link like on the main lift, it will have been very fast to minimize the time between the ball arrive and it is in the hours digit which would have been not reliable. 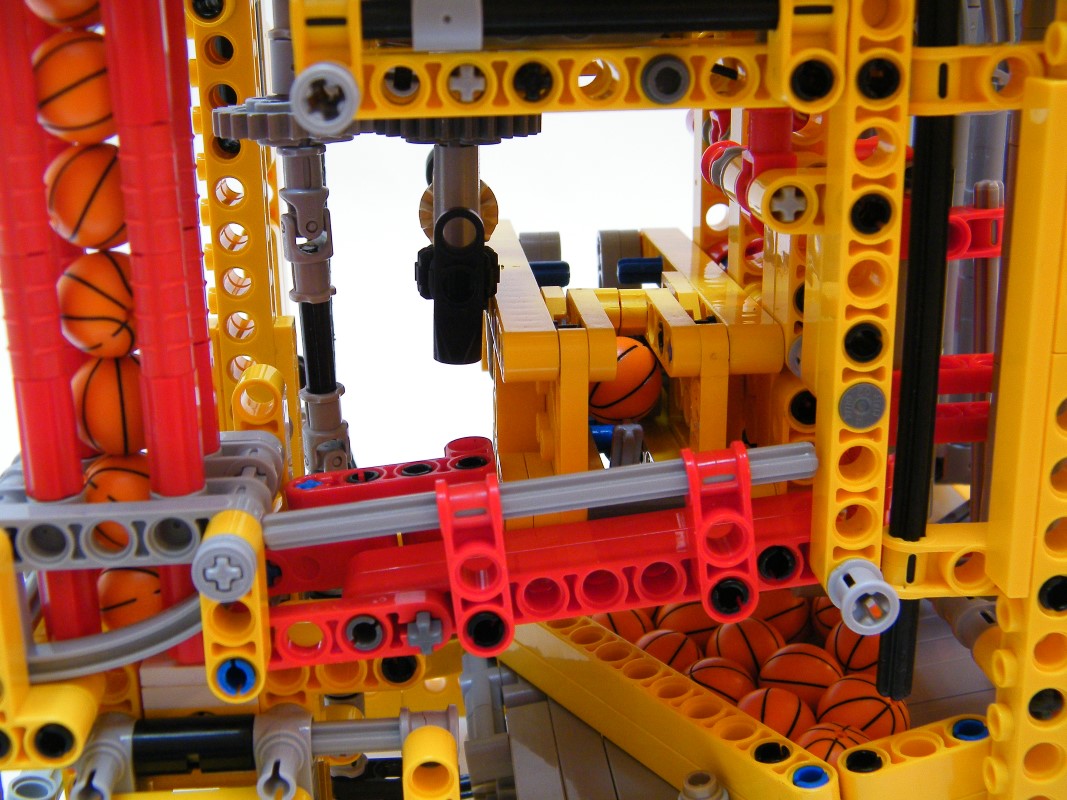 The system of the ball pump used a classic scotch yoke. A square in white is attached to a rotating pulley, the square is surround by L-shape liftarms which can move in horizontal movement. Combining the movement of right to left of the frame and the up and down of the square enables the system to take a ball, passes through the column and pulls it underneath the other, which pulls the upper ball.

Thanks to that, each time a new ball arrives in the ball pump, the upper ball on the top is released and go the hours digit. 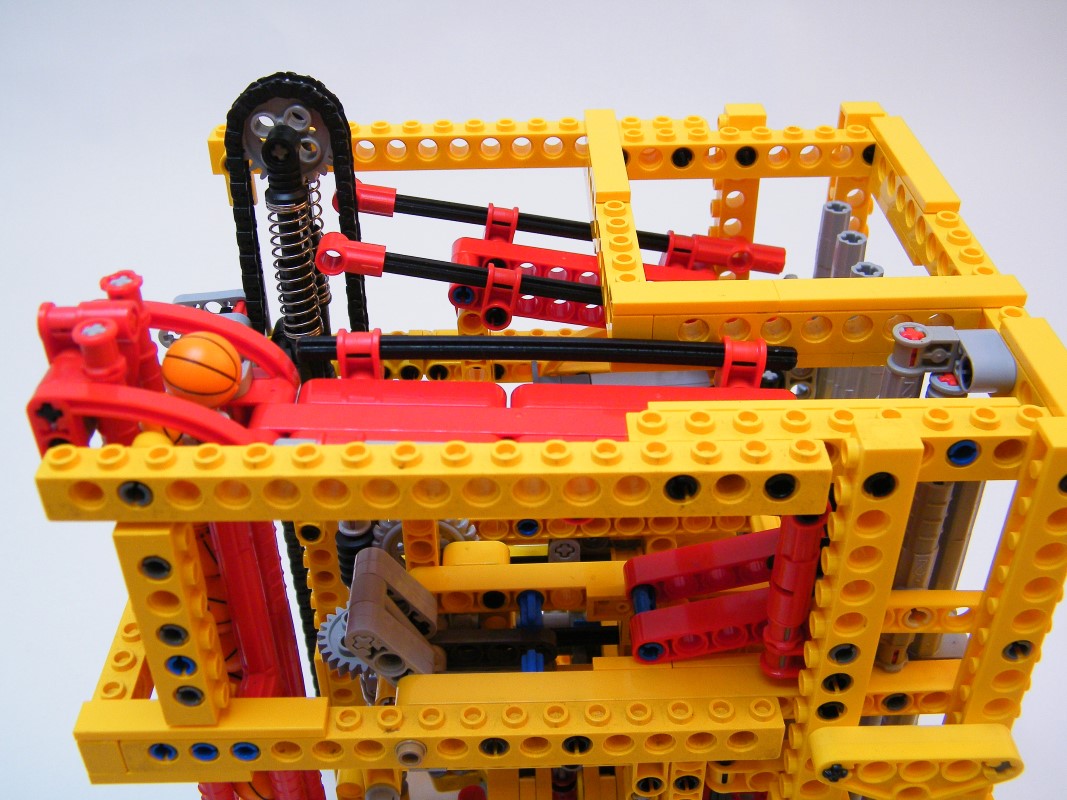 And to finish, when the hours digit is full of 11 balls, the 12th falls on the last set to zero system. This system is located directly underneath, and when the 12th has released the 11 balls of the digit hours, it returns to the ground, in the main storage at the bottom. 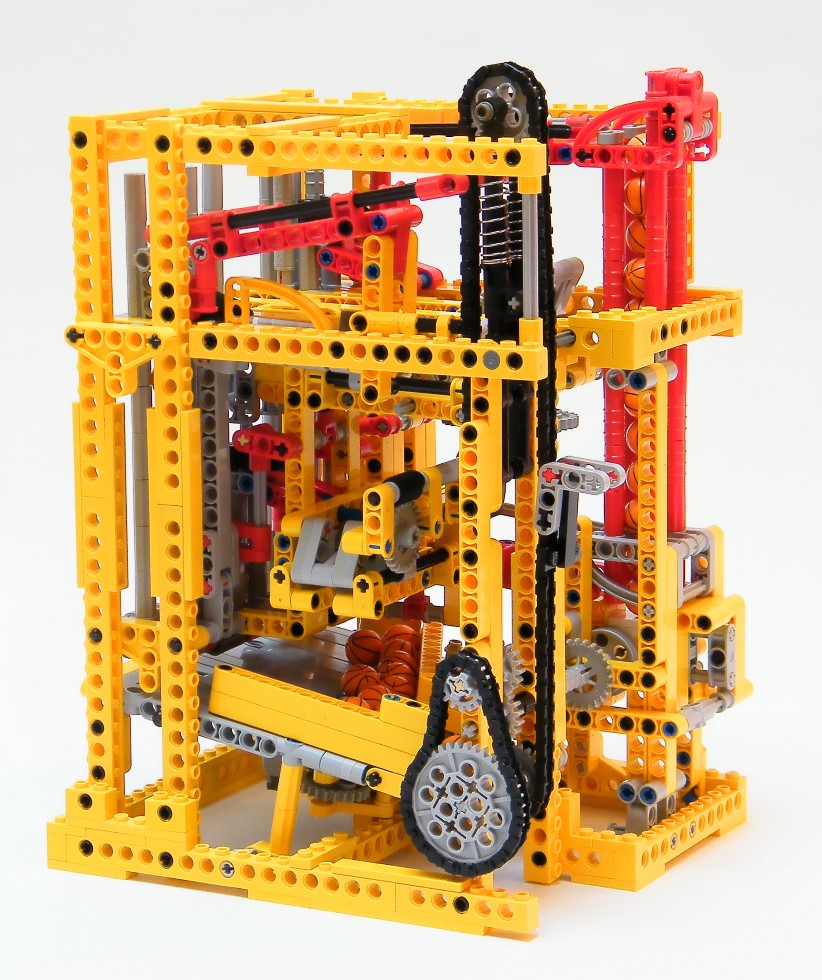 The whole clock is powered by only one motor which is a M motor. It is place underneath and drives the main lift, agitator, ball pump and the three pushers. I use a regulated power supply from a train regulator in order to keep a constant tension on the motor. But in order to adjust the period precisely, I don’t use a variation of the tension on the motor thanks to the regulator. I use a modification of the length of the main chain. As you can see, the chain is tightened by two springs. It ensures a good functioning for the lift and the fork which takes the balls, but also allows me to add or remove a chain link, adjusting consequently the period. There is 114 chain links, so the average resolution of set up is 0.5 seconds. Concerning the accuracy, it is measured to some second each minute, therefore 1 or 2 minutes each hours. This is far away than the quartz clock but pretty good for a ball powering clock.

The only sad thing regarding the development is to not manage to make a AM / PM indicator to know what time is it (morning or afternoon ?). I have tried several solutions, but counting alternatively the AM and PM each 11 balls released of hours has been pretty hard to make in a reliable version. That is why I have not made a system like that.