After my Mini Citroën 2CV in Lego, many people asked me to build other Citroën models, for instance DS, BX, SM but also (and mostly) Mehari. After some months, a fan asked me by email to design him a Mehari version of the Big 2CV I designed year before, which convicted me to work on the Citroën Mehari version and make building instructions in order he can rebuild it. I have chosen to not go for a big scale because of the amount of needed parts and because I wanted to build in different colours. That is why I have chosen a small 1/15 scale for these Mehari.

The functions are rather basic in this scale, but are mainly focused on playability. As on my previous Mini 2CV, the Mehari version is equipped with independent suspensions with metal springs located in the floor. It enables to have the same bouncing suspensions as real. The steering wheel is connected to the steering using U-joins and operated the steering by a lever plus a link 6L. An other link 9L connect the two wheels. 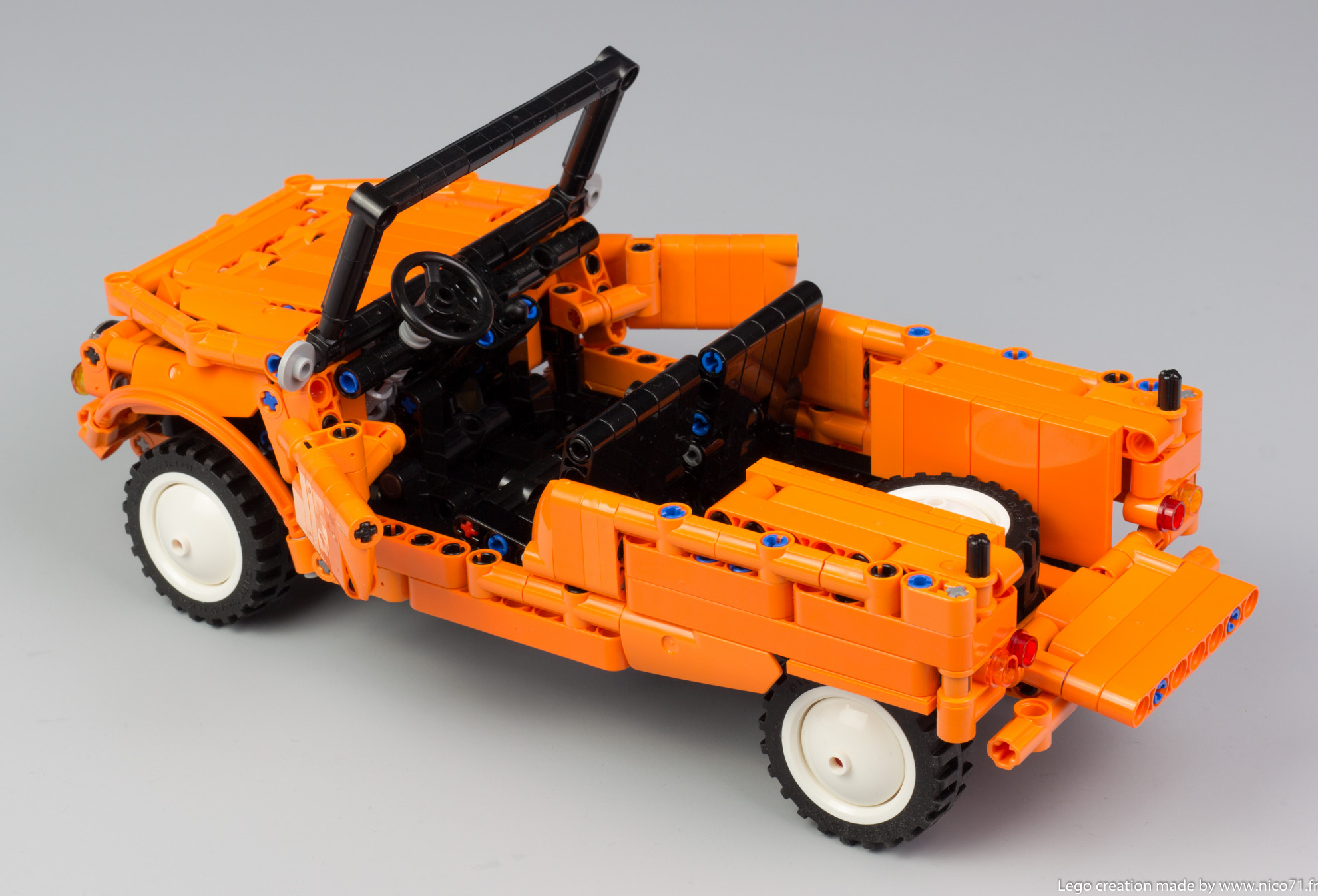 The next functions are more about design functions. In deed, the doors and the bonnet can be opened to reveal a detailed engine (but not working), which can be removed easily to see how the steering and suspensions work. The rear is equipped with a spare tire accessible by the rear tailgate which can be opened too. To finish the upper hood can be remove easily with centring pins on the middle near the pillar and axles at the rear, in order to have a better playability or realistic look. 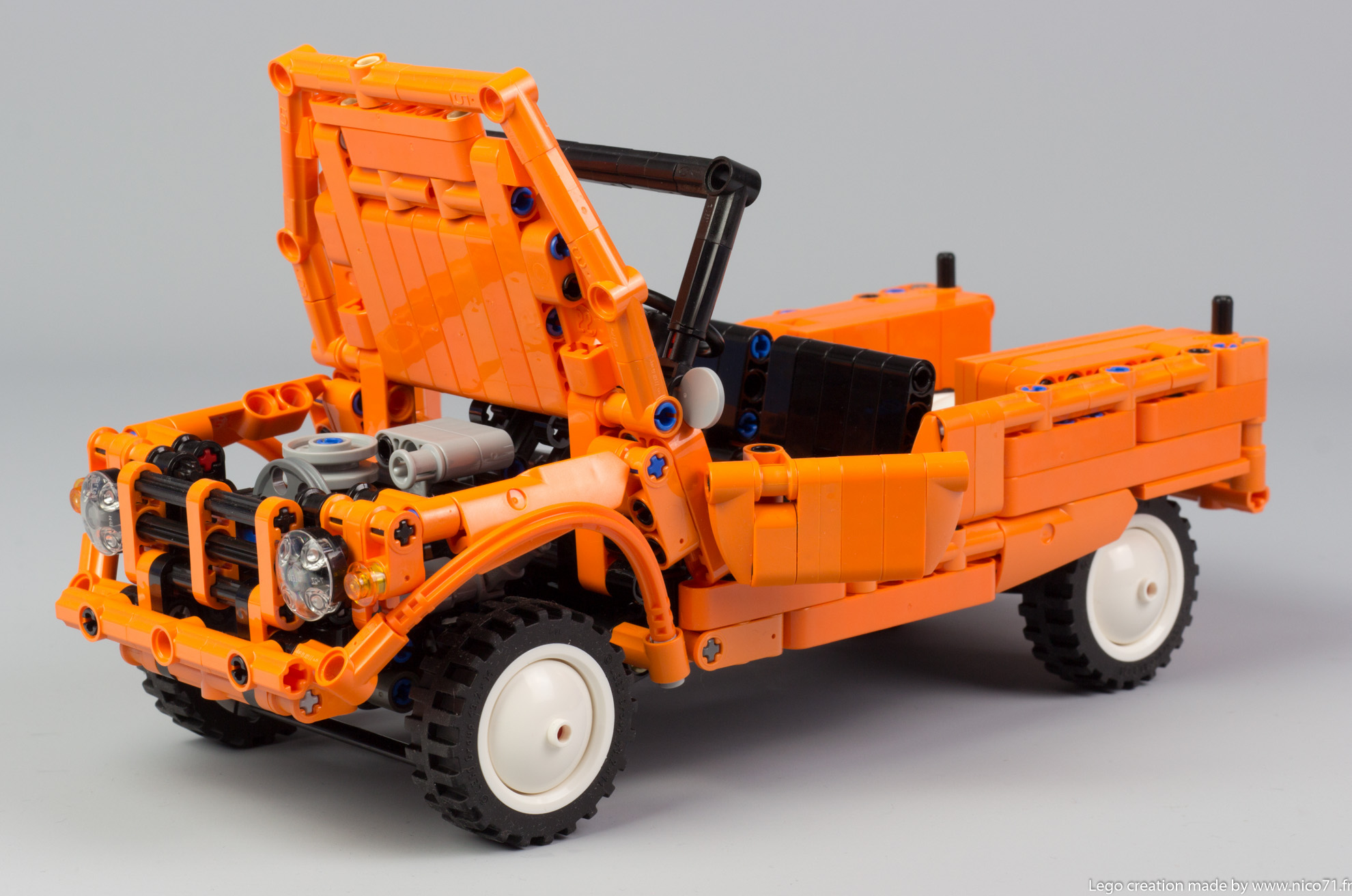 The design was the most difficult part here. The mini scale has the advantage to enable less details for the users, but need to have iconic details and good proportions in order that people forgive the approximation but recognise easily the model. I have started to work on the side of the car, trying to reproduce the shape of the rear wheel arch. I also wanted to build something sturdy and with cheap parts, that is why I have chosen a combination of a panel, beam and tiles. The other difficult part which has reduced the available colour for this project were the doors. I wanted to reproduce the shape of the doors and the difference of height between the doors and the bonnet which are iconic. I managed by using Bionicle tooth and a beam positioned with an angle. It doesn’t fit perfectly the original shape but it enables to have a sturdy design and smooth side. 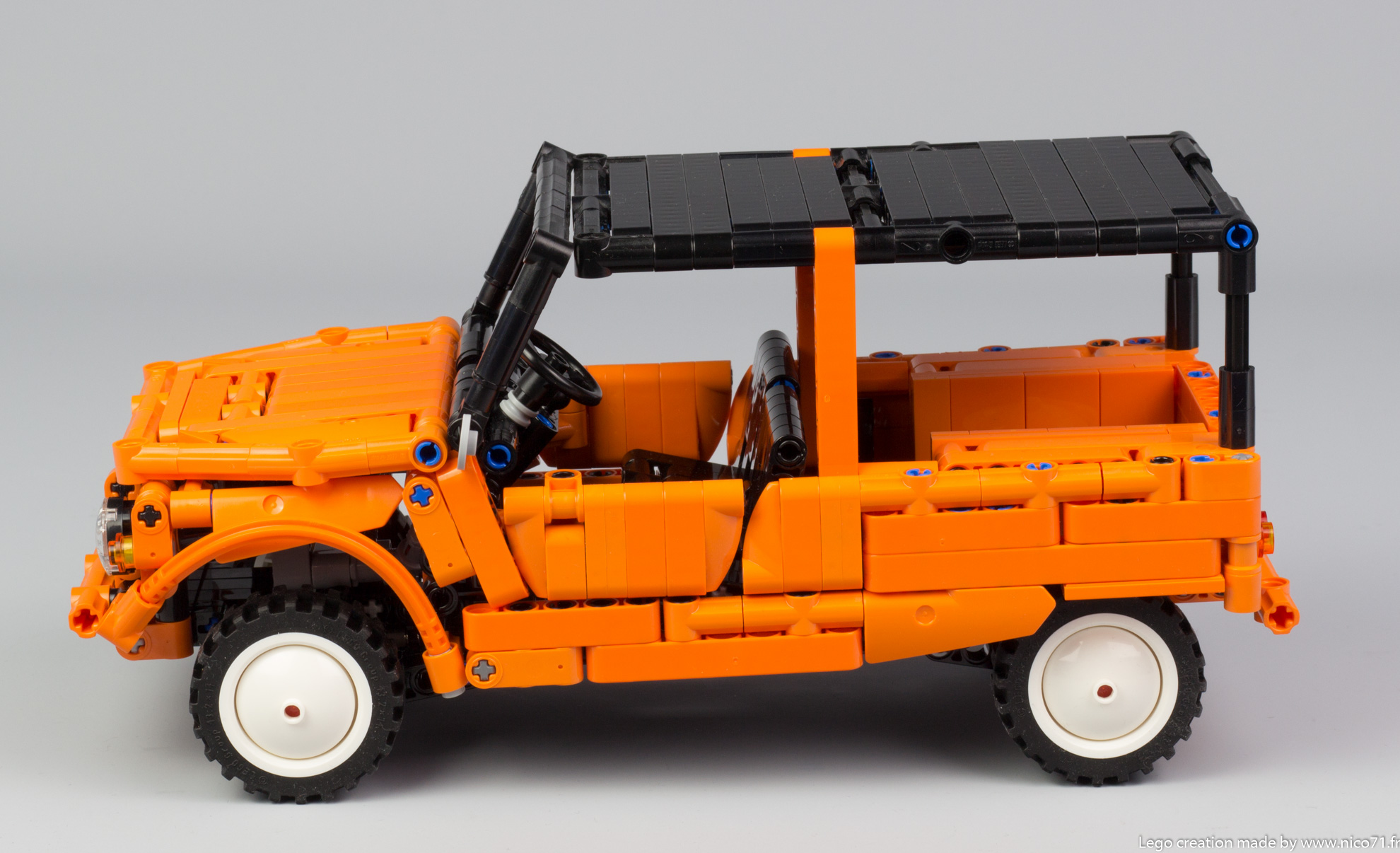 The other difficult part was the fact that the rear wheels are covered by the mudguard and go in the bodywork, as on the 2CV. I was easy to do on the 2Cv because the trunk was closed and not visible, therefore I could hide the wheels inside the wheel arch on the each side (which reduced the room in the trunk). But here I could not make the same because it would have reduced the size of the rear trunk and would not fit the proportions. that is why I searched a way to have a thinner box as possible, by using plate and tile placed by half pin. 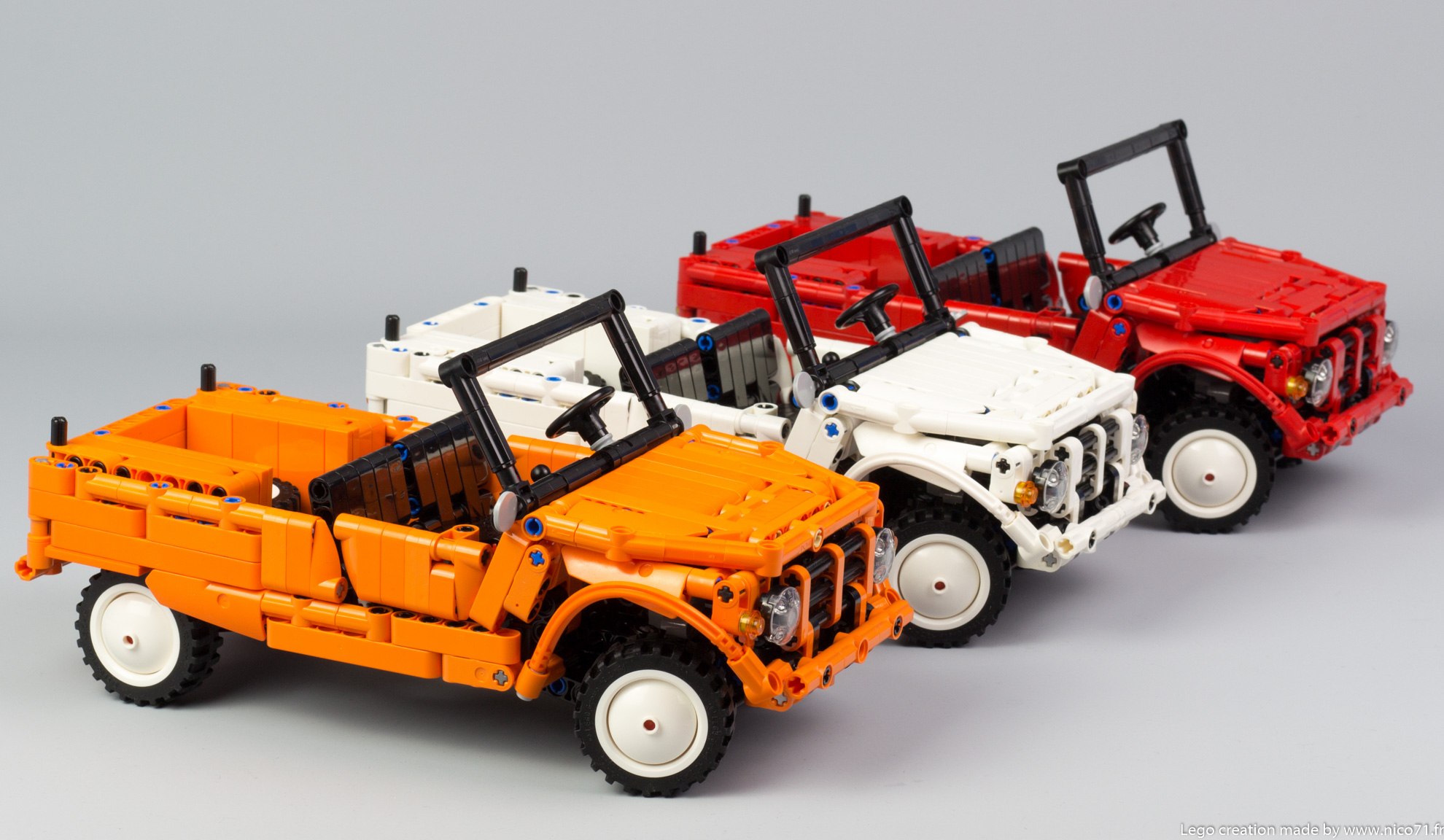 I finished the design by making the interior and the bonnet which was easy to do with the connectors and beams. The front is rather simple also except the lights which use 1/2 gap technique to fit correctly the lights and corner lights around the front grill and the bonnet. The only regret I have is to not be abbe to put end stops on the suspension and steering in order that the wheels do not touch the body when you turn and press entirely the suspensions. It was too hard to fit at this scale without reducing too much the travel of suspensions.

An important point of this project was to create building instructions. That is why I focused myself to use available and cheap parts and find 3 possible versions without major changes in design : red, white and orange. You can see below the three versions with : 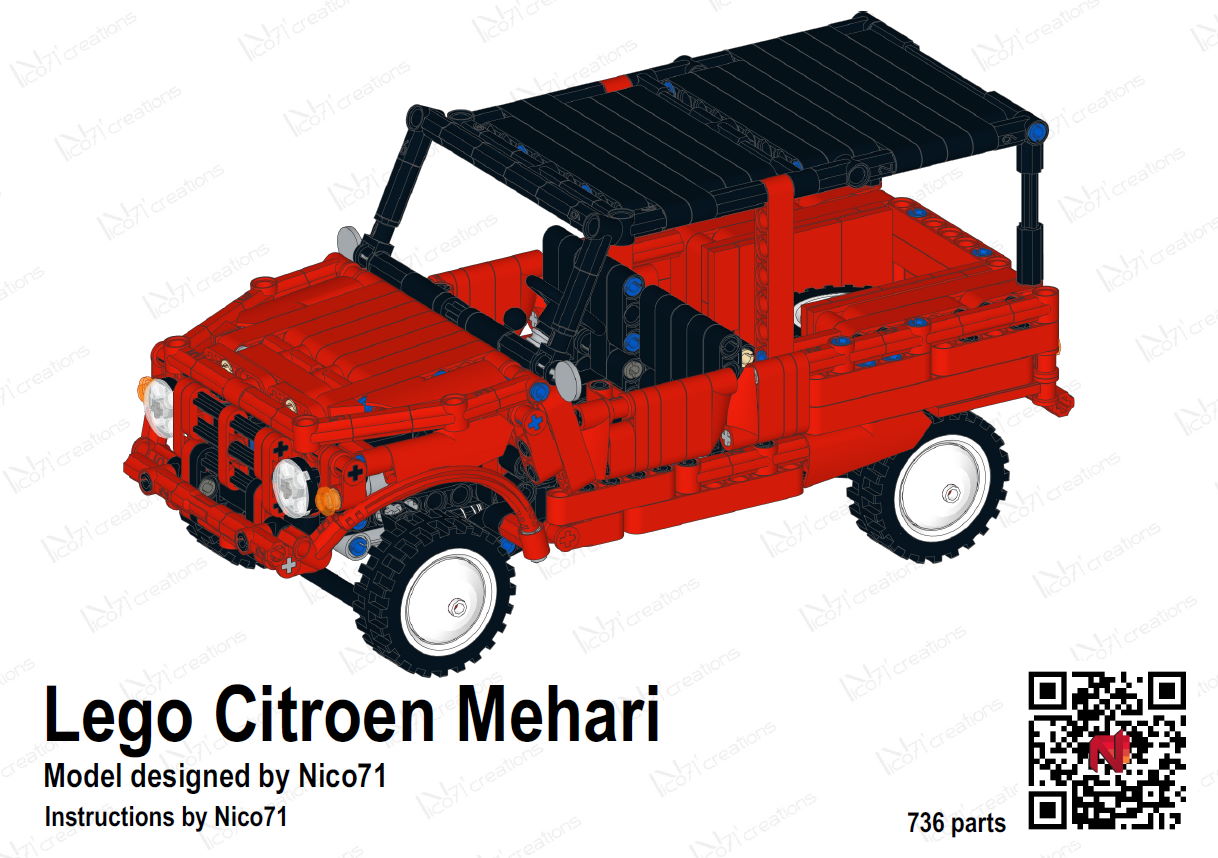 Want to know if you can build the red version of the Citroën Mehari ? Click here. 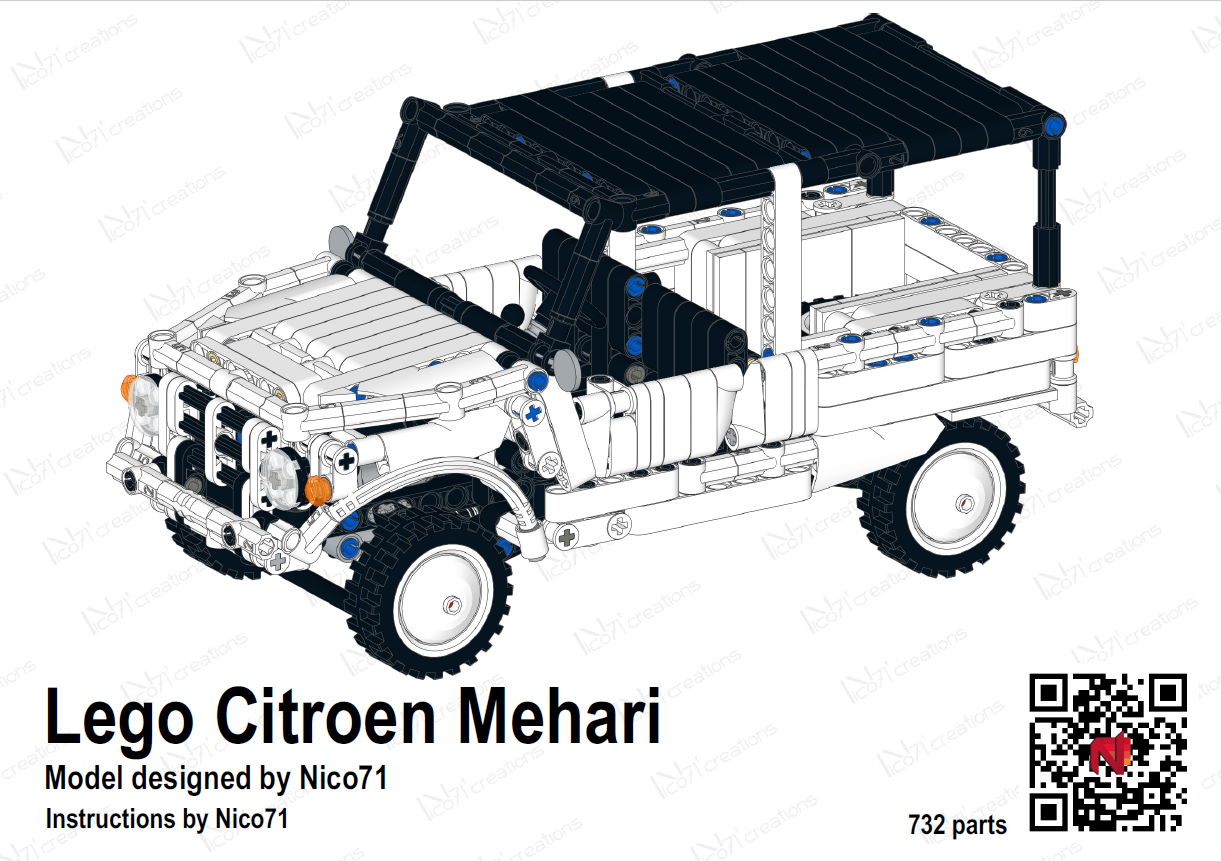 Want to know if you can build the white version of the Citroën Mehari ? Click here. 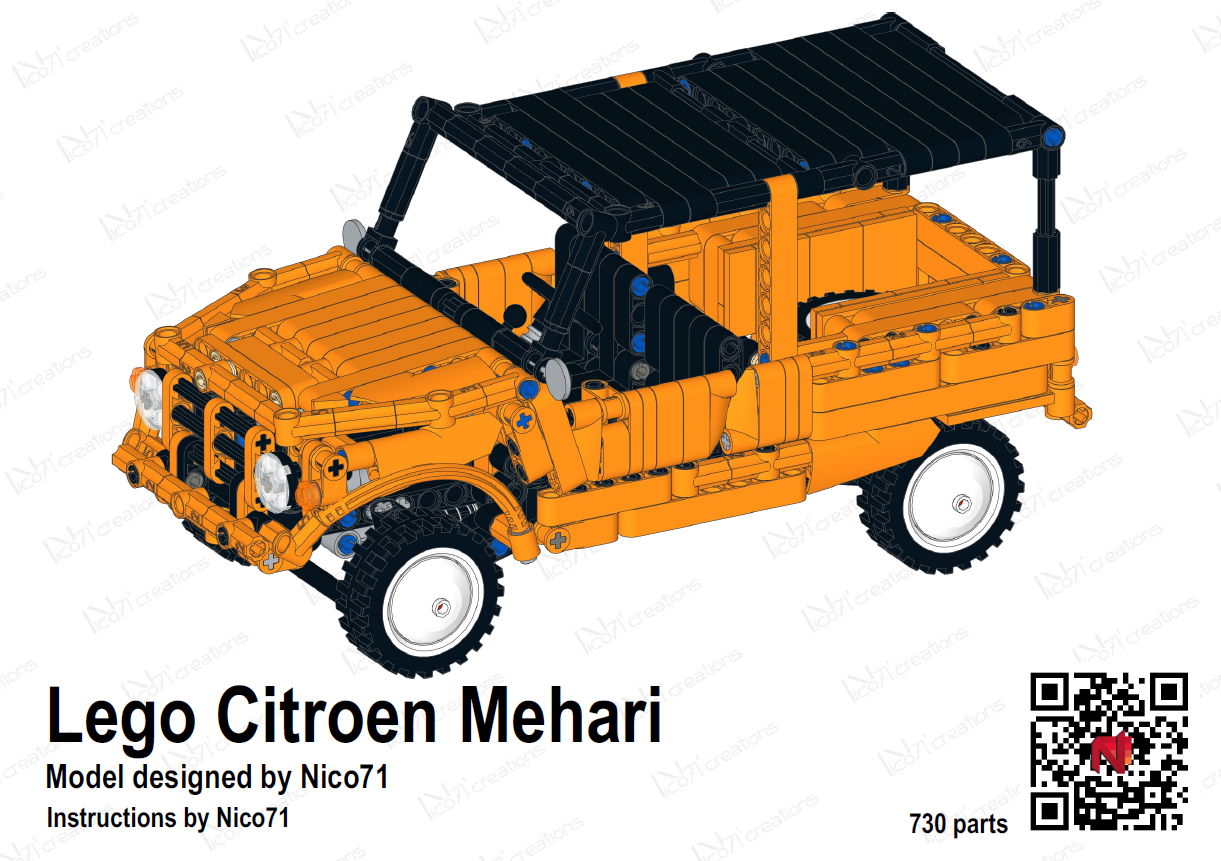 Want to know if you can build the orange version of the Citroën Mehari ? Click here.