My new wheeled vehicle since a long time ago ! Featured all wheel drive, steering with functional handlebar, suspensions and white design ! 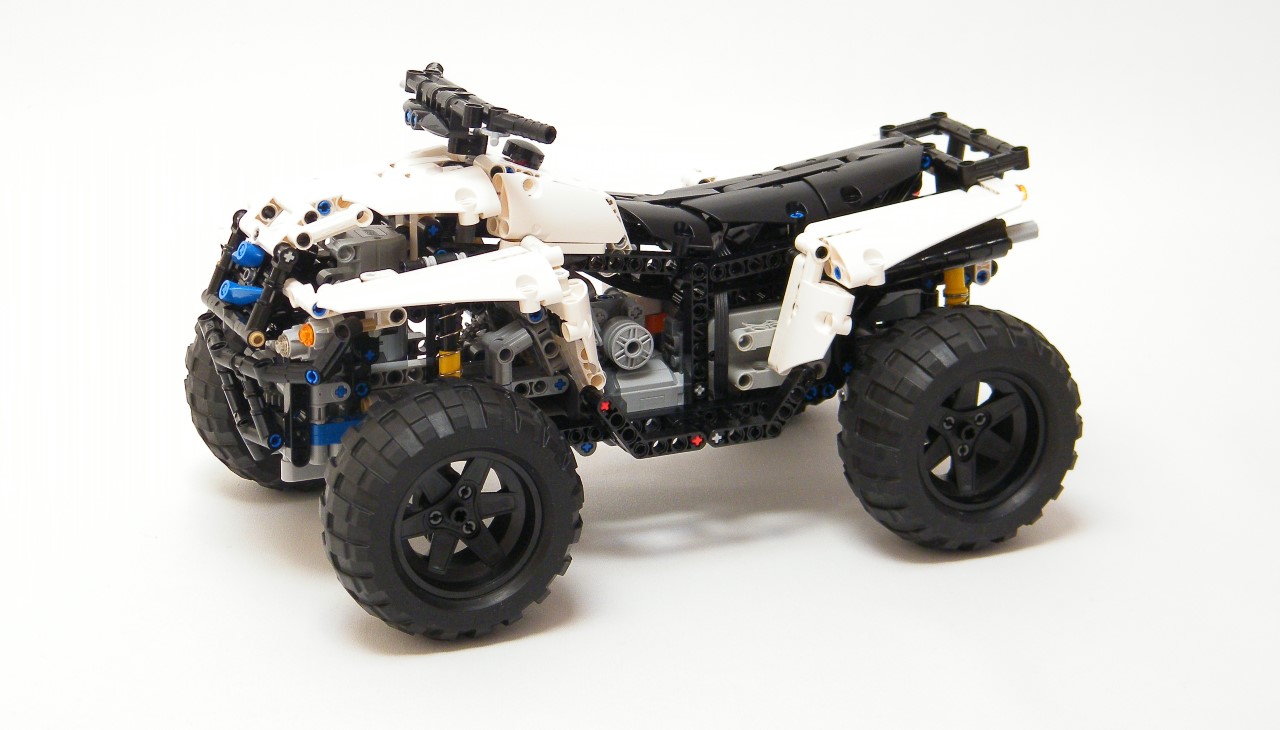 There was a long time ago since I have not created wheeled creations. After months making clocks and machines, I would like to return to basics with a motorized vehicle. Here is the result ! 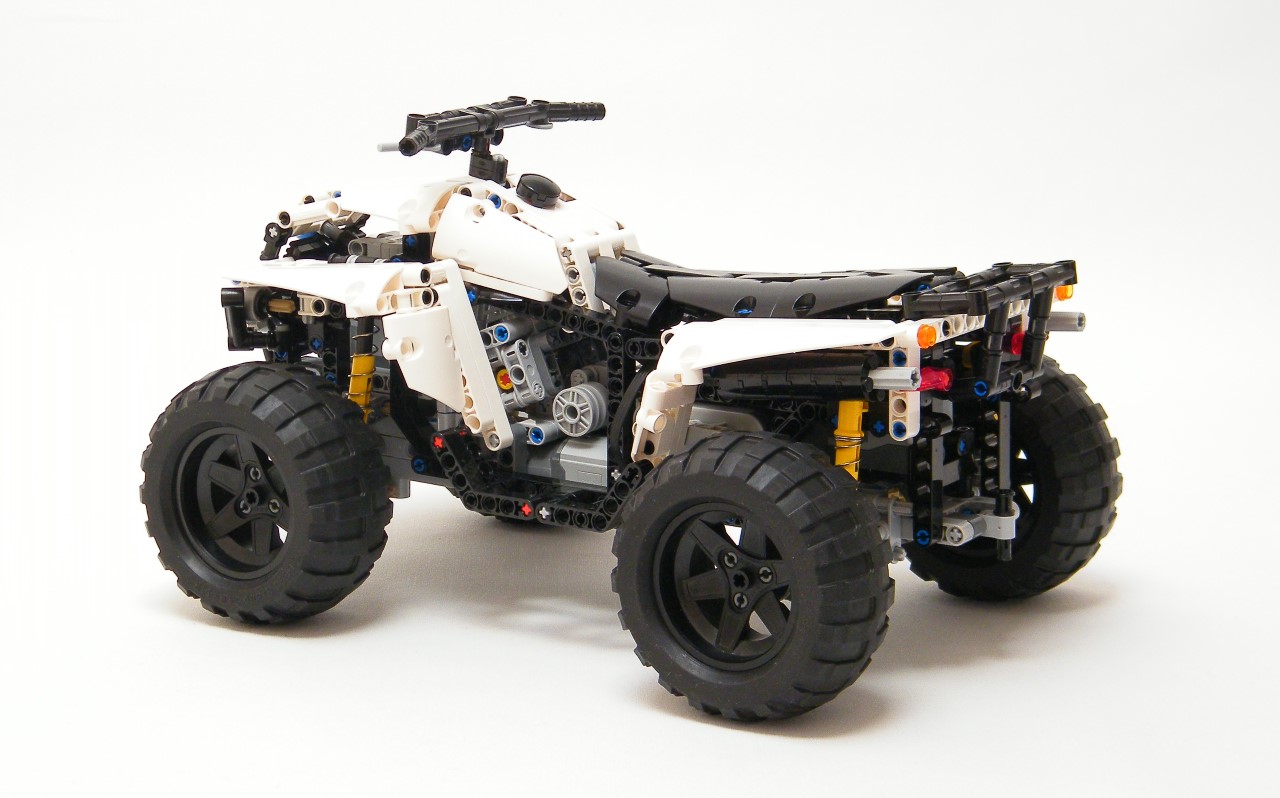 The aim was to use the white parts from New Plane #42025 from lego bought recently and the hubs of the F1 #42000 (purchased separately on bricklink.com). Back to basics, I would like to combine simple functions with nice design in a vehicle that I have never done : a quad !

Here is the formal specifications :

Concerning the drive. Two L-motor are connected to a 24tooth on the central driveaxle. Then each axle is powered by this driveaxle with a 20tooth gear on differential. No more reduction of gearing, in order to ensure good speed and enough torque. You can see the drivetrain on this below picture  : 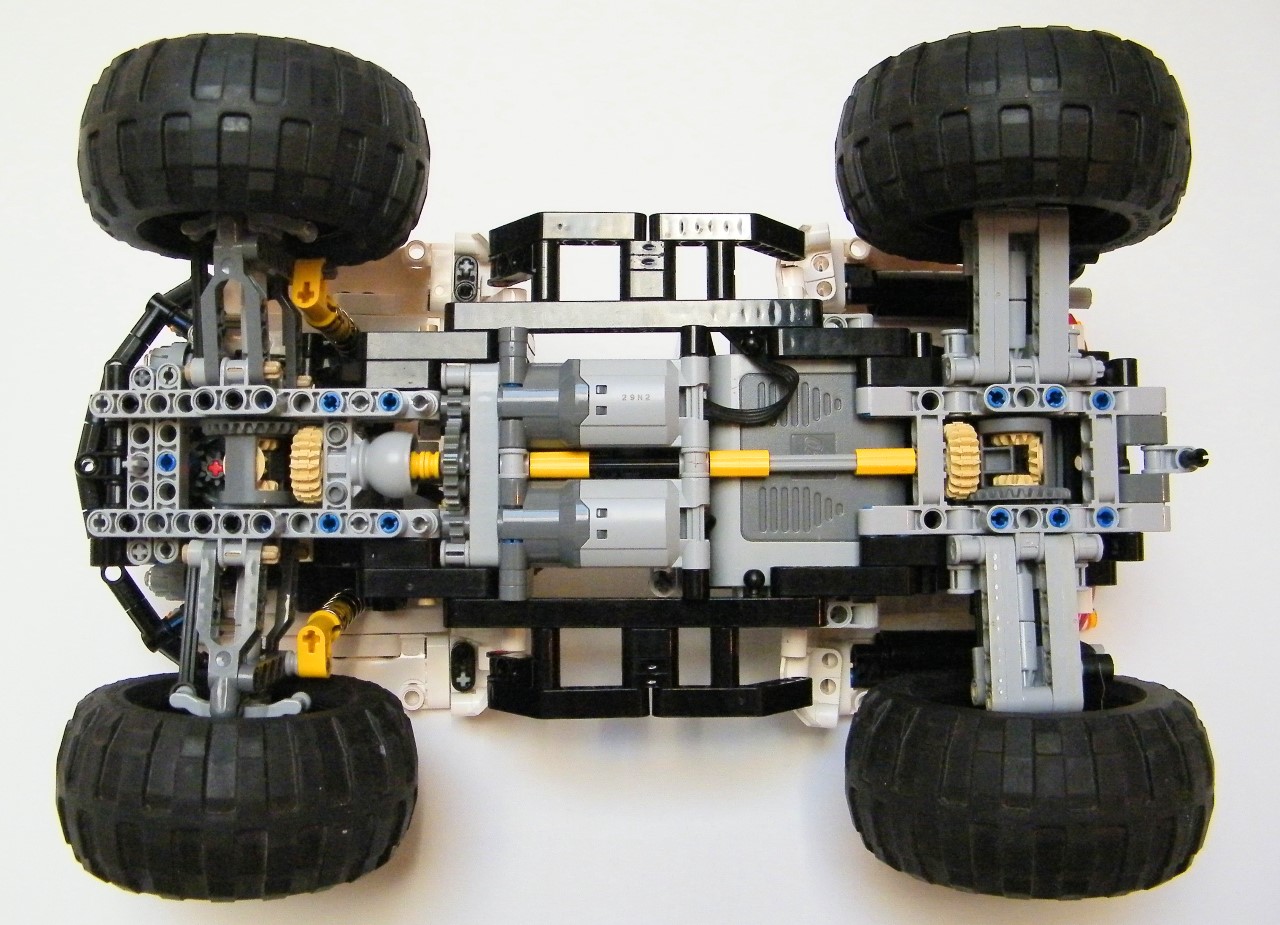 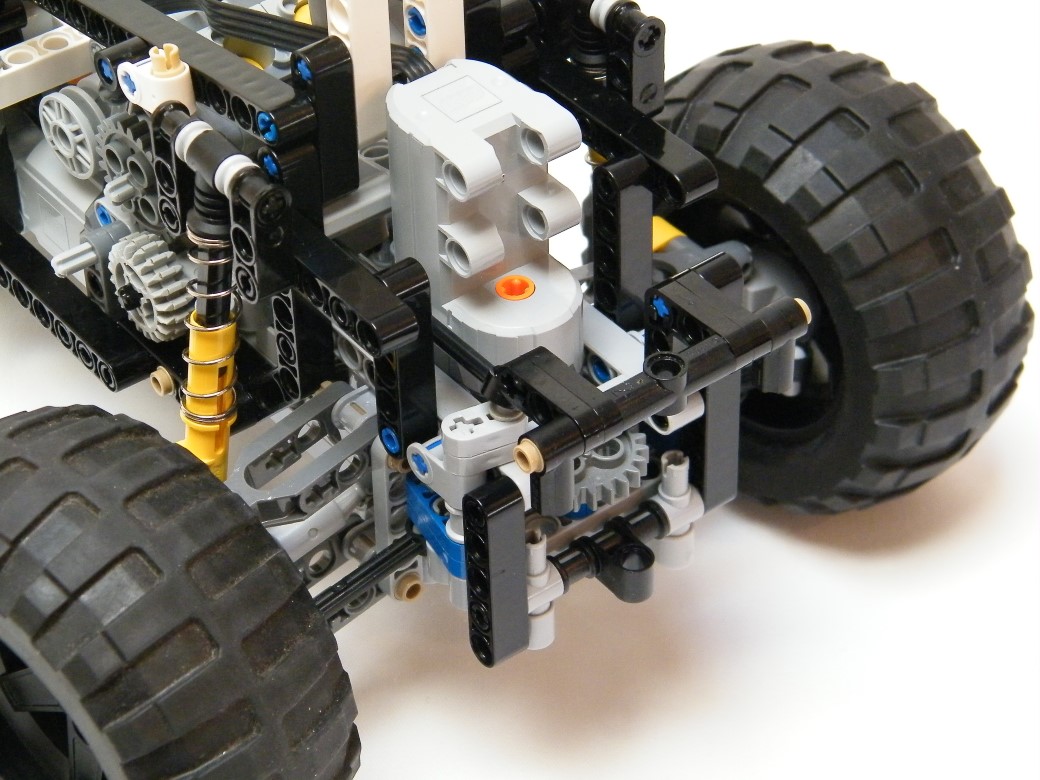 The frame is build as on a real quad, using double cradles and up frame composed of inclined beam. Then, inclined beam are also mounted to the rear to give the particular shape of the sadle. The Battery box and the IR-receiver are placed at the bottom of the quad, and on the double cradle, ensuring a low center of gravity and easy removal. The bodywork can be removed easily to show the frame as shown here : 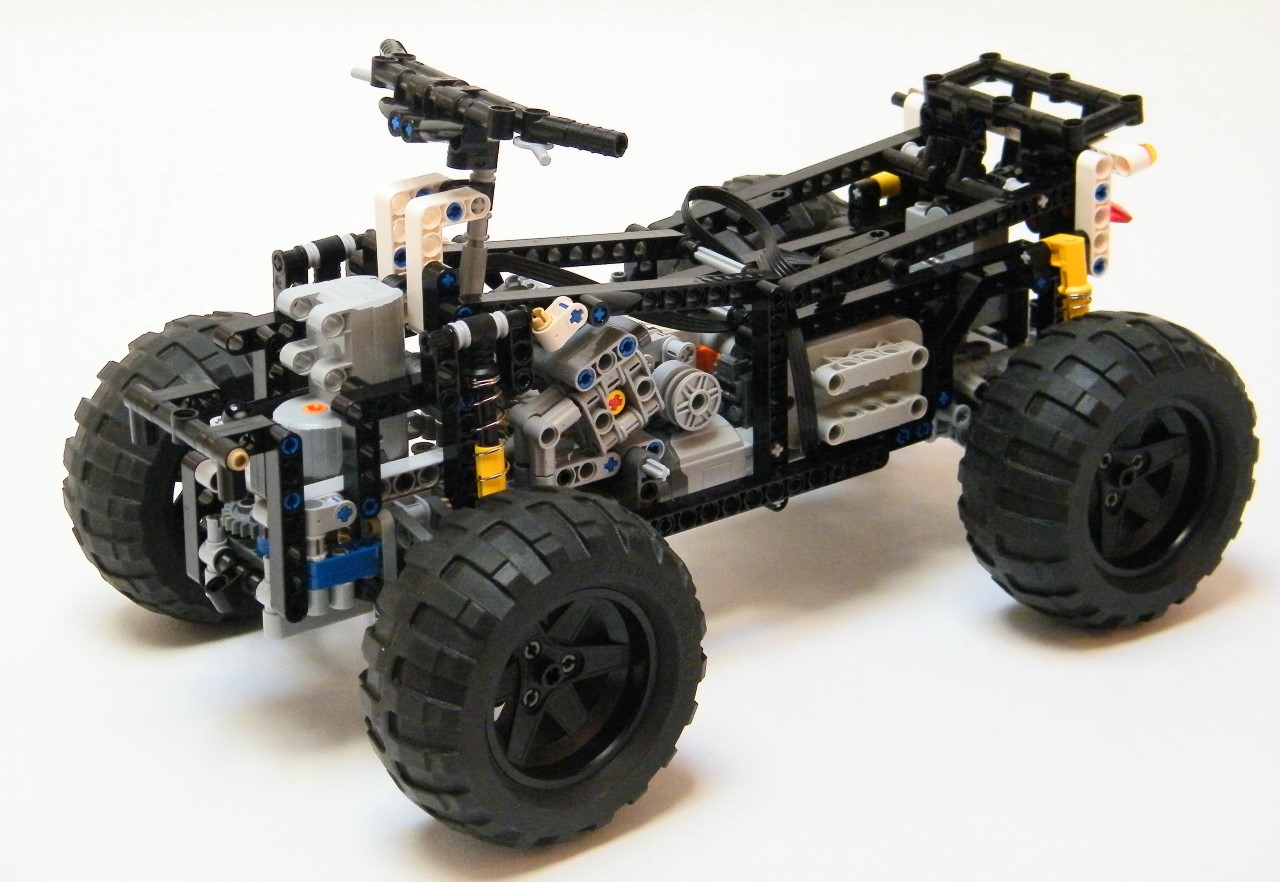 To finish with the function with the fake engine, it is powered by the central driveaxle, with a 8tooth gear on the 24th. Then a bevel gear composed of a 20 and 12tooth gear, and finally a spur gear with 20 and 24tooth makes the fake engine driven. With this gearing multiplication, the fake engine run at 1300tr/min. also, note that I have reproduced the front inclination using angled connector. 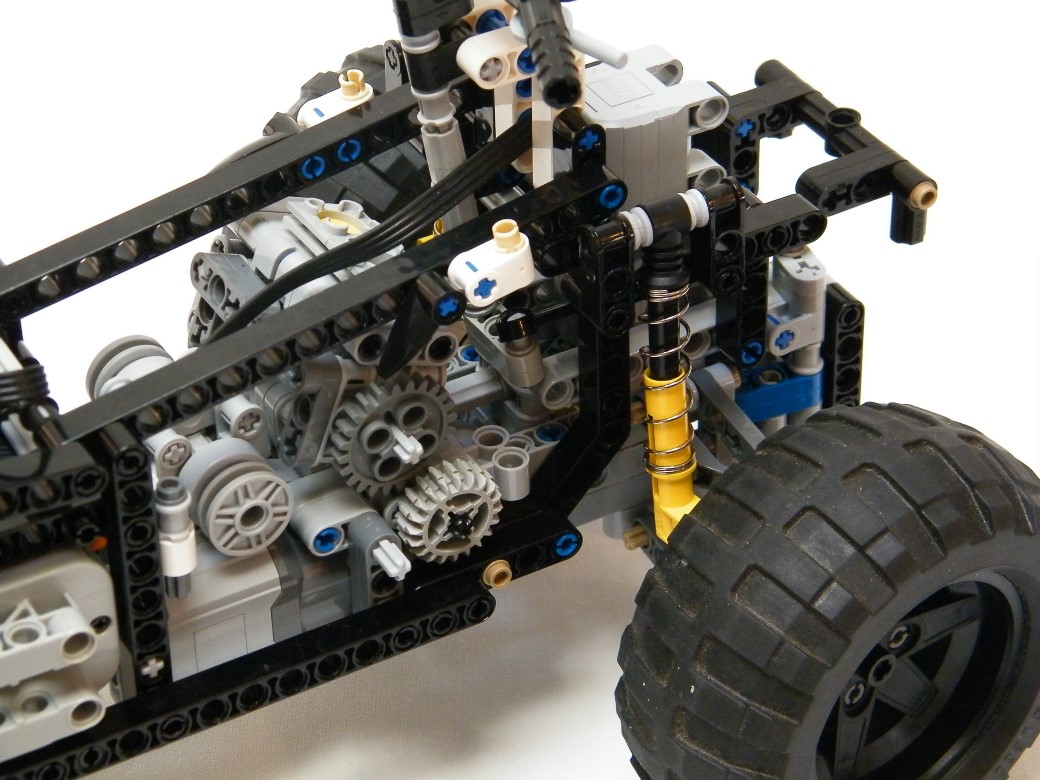 Concerning the design, I have tried to make it the nicer as possible. First, dealing with the particular shapes of a quad, and the lack of some parts in white (only build with the Lego plane parts). Consequently I have reproduced the shape of the wings using panel with inclination. I have also reproduced the double shaped tank, with a smaller parts near the saddle and convex upside shape. The last big element with trouble I have was the saddle. I have tried many versions with beam, flex and so on and finally chose black panels. The shape on the panels ensure a good curve of the saddle and I have created concave support to make the saddle hollowed. Finally I am very satisfied of this design : 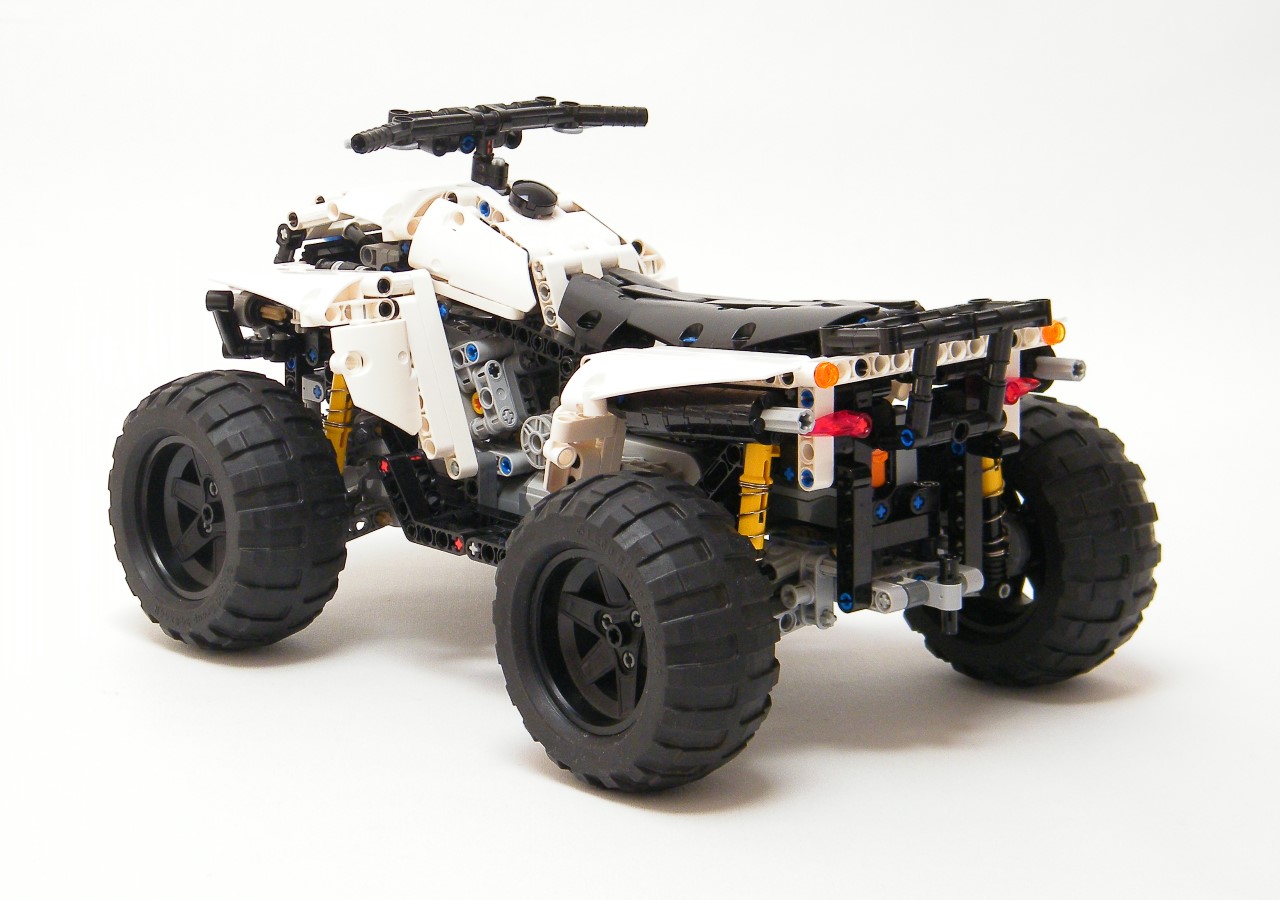 To conclude with the climbing habilities, they are rather good. The differentials can slip some time but ensure a good playability on sticking surface. Also the speed is rather fast thankt to the L-motor but with a good torque to climb some slopes of obstacles. To finish, the suspensions make the work, ensuring a good stability of the wheel on the ground.

It was a long time since I have done building instructions. As usual, they presents as a detailed photo sequence with a bill of material. Also available on rebrickable.com

Want to check before if you can build the ATV Quad 4×4 ? The ATV Quad 4×4 has been indexed to Rebrickable.com, the website which matchs your parts with mocs !